Apr 14 2330 UTC UPDATE: Russian MoD said cruiser MOSKVA sank, claiming that cruiser sank during salvage operation, while on tow. Cruiser sank in stormy weather after she lost stability, says MoD.
According to probably, most impartial Turkish and Romanian sources, cruiser capsized and sank much earlier, not long after she was hit. Strong rumors said 54 crew were rescued by Turkish tanker which happened to be nearby, some 17 nm SW of Zmeiniy (Snake) Island, near position where cruiser was hit. Tanker spent some time near this position, resumed voyage and reached port of destination in Danube river. Russia said all 510 crew were evacuated to Russian Navy ships, no casualties. According to non-Russian sources, however, there were casualties.
In WWI and WWII, hostiles States recognized the losses, more or less accurately, and also the causes of the losses. Interestingly, German war reports, including their own losses, were considered (though not officially recognized as such), as most timely and accurate. Times changes, definitely. Real wars nowadays are clouded by thick smokescreens of virtual fakes and lies, and honesty equals stupidity. 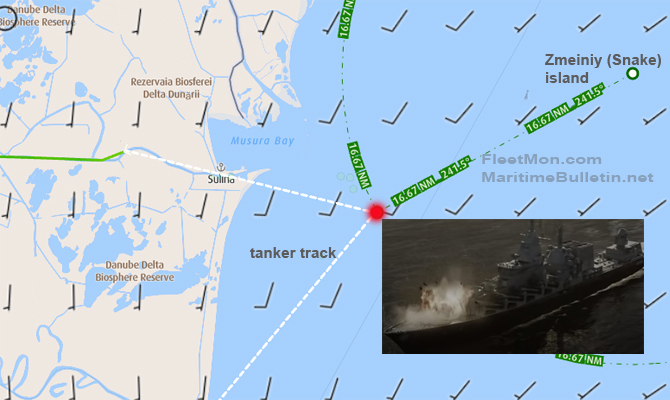 Apr 14 1200 UTC UPDATE: According to Russian official statements issued by MoD, MOSKVA is still afloat, attempts to tow cruiser to Naval base in Crimea are under way. All crew evacuated to other Navy ships, says MoD. Ukraine insists cruiser sank or sinking. A post in social nets, posted obviously, by seaman, claims 54 MOSKVA crew were rescued by nearby Turkish tanker (there is Turkish tanker nearby, according to AIS data). A mess of information, misinformation and disinformation, of truth and fakes.

Apr 14 0815 UTC UPDATE: Several sources including Ukraine officials claim cruiser MOSKVA capsized and sank after developing heavy portside list. The majority of the crew were rescued, but according to Ukrainian sources, a number of the crew died or went missing. Cruiser sank near Snake (Zmeiniy) island, Ukraine, Black sea, east of Danube estuary.

Reports emerged some 1-2 hours ago, as of 2200 UTC Apr 13, that the flagship of Russian Black sea Navy, cruiser MOSKVA, was hit by two NEPTUN (Neptune system fires low-altitude R-360 cruise missiles) anti-ship missiles, in Black sea off Odessa Port.
The hits were claimed by some of Ukrainian officials, but aren’t confirmed officially either by Ukraine or Russia, or verified by other sources. Cruiser was said to be on fire, in rough weather, with 510 crew on board. There’s one photo in social nets of alleged strike at the moment when cruiser was hit. On photo, undoubtedly, is Moskva-type cruiser, probably MOSKVA, but the hit looks more like photoshop fake, than a genuine photo. UPDATE: Considering latest updates, maybe it’s a genuine photo of a hit, after all.
Russian Navy Black sea Cruiser MOSKVA, Project 1164 Atlant class of guided missile cruisers, commissioned in 1983, displacement 12490, speed 32 knots, armament: 16 fixed launchers for P-1000 anti-ship missiles, vertical tubes for 64 S-300 air-defense missiles and rail launchers for 40 Osa missiles for aerial self-defense, guns, torpedoes, helicopter. 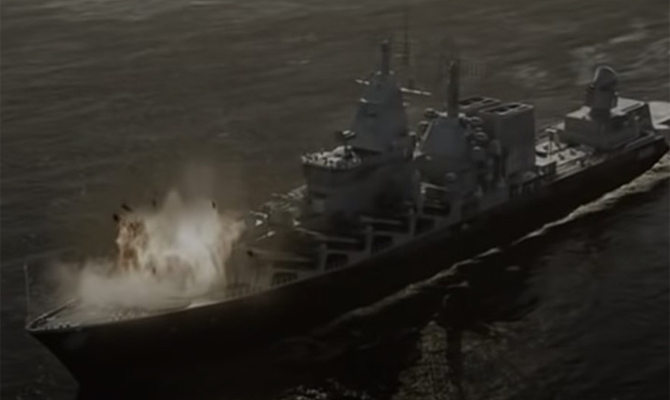 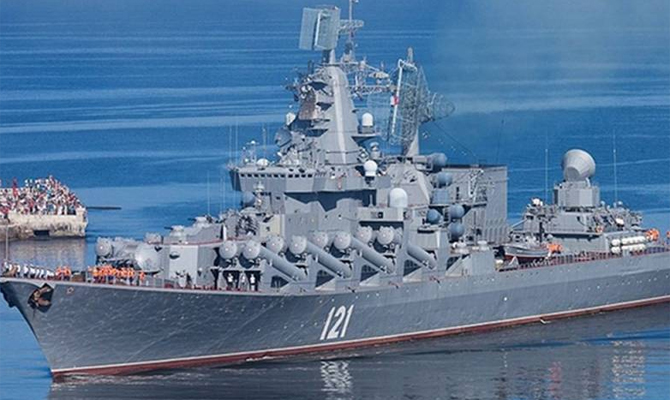