Container ship MARCOS V being caught in storm Eunice, lost at least 26 containers, all reportedly empty FEU, in North sea NNW of Frisian islands, Netherlands, at night Feb 18 (according to track), and reporting loss in the morning Feb 19. The ship was sailing south en route to Rotterdam, she has been changing destinations at least 2 times since leaving Bremerhaven on Feb 13, cruising or being anchored in North sea, between UK and mainland. Last destination was Rotterdam, probably after containers loss. She berthed at Rotterdam at around 1200 UTC Feb 19. Dutch CG started a search for lost containers, none were found as of morning Feb 19.
Container ship MARCOS V, IMO 9307059, dwt 72968, capacity 6350 TEU, built 2005, flag Panama, manager EUROBULK, Greece. 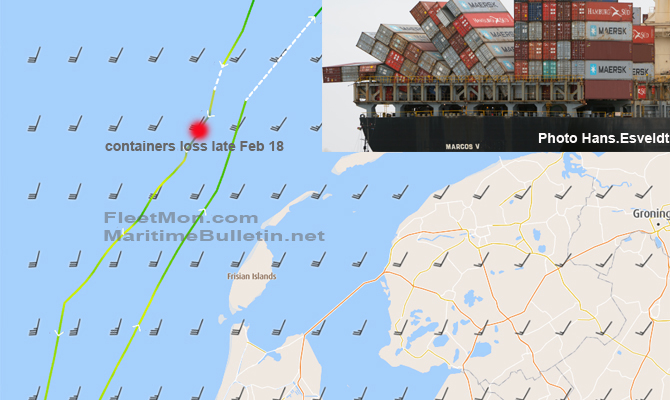