Dec 8: Situation along the Northern Sea Route is normalized, or if looking at eastern sector of NSR, doesn’t exist any more – there’s no “situation” to talk about. Nuclear icebreaker TAYMYR led the last ships of west bound convoy of 3 dry cargo ships and 1 tanker, including Finnish bulk carrier KUMPULA, to ice-free waters, they’re safe and continue their voyage. The only ships left in eastern sector, are west-bound LNG tanker NIKOLAY ZUBOV, and dry cargo LEV YASHIN, in Pevek. That’s about all. LNG tankers of NIKOLAY ZUBOV type are icebreakers in their own right, though there’s no doubt, that they’ll need real icebreakers, if they’re to continue their transits.
As for western sector of NSR, it has a year-round navigation, and always had, with or without “Climate Change”.
What’s really astounding in this year’s NSR navigation, is the speed, with which Arctic ice cover returned to mediana 1981-2010 ice cover boundaries. It took Nature just several months, to recover ice to its’ former boundaries. Several years to melt to more or less substantial, noticeable, cover decrease, and several months to return to normal, and in some areas, already surpass mediana 1981-2010. Judging from weather and temperature maps, Arctic ice cover looks like it’s on the way to surpass mediana, and reach record-high boundaries. 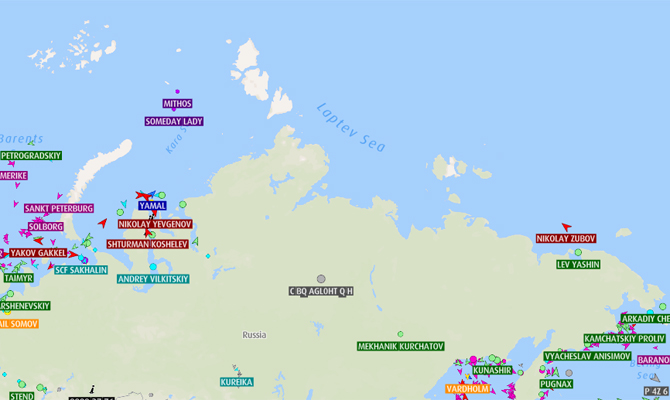 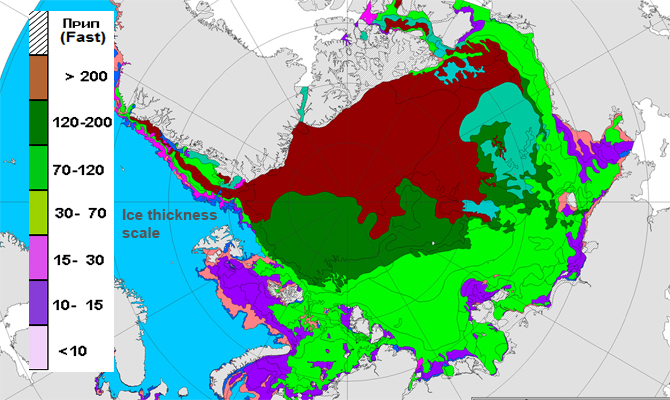 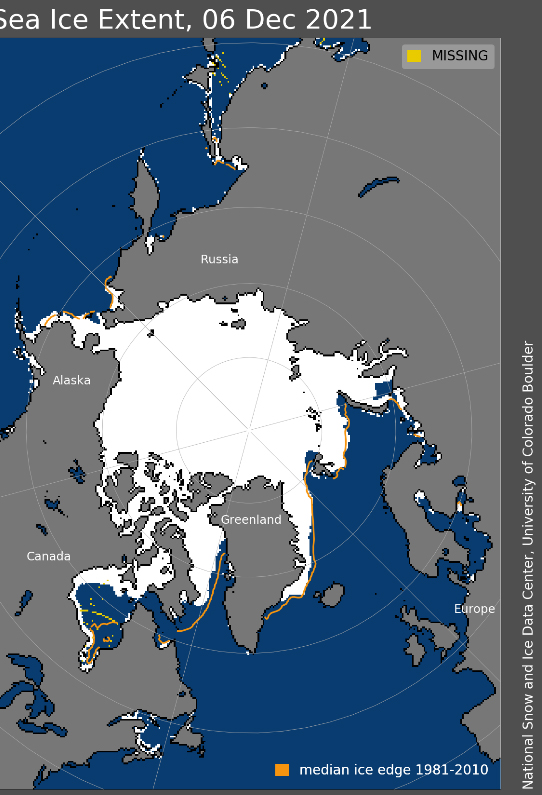 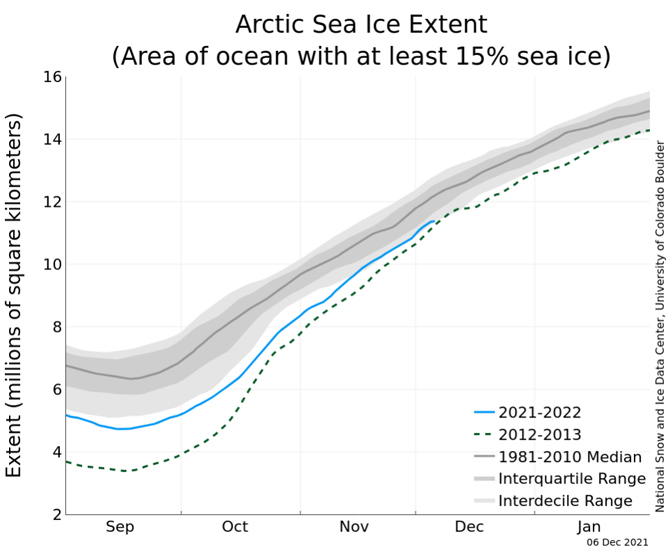 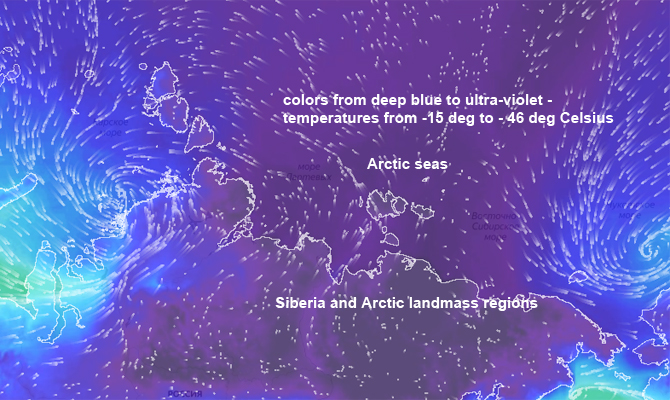 Comment:
Barents Observer and the likes, no doubt, are greatly disappointed. Even with the help of ever-ready to falsify data, Roshydromet (Russian Federal Service for Hydrometeorology and Environmental Monitoring), it’s impossible to claim, that the temperatures are abnormally high, though a month ago Roshydromet tried to do exactly that (and Barents Observer was only happy to spread the lie around). Roshydromet was harshly criticized by a number of agencies and ministries of Russian Government, for its’ false forecasts and damages they caused. I on my part, did my best to debunk Roshydromet, when giving interviews to a number of Russian national media outlets, TV, radio.

But it’s not all that important. There’s something of much bigger importance here – I invite everybody to fathom the immense importance of Arctic ice record-fast recovery. Nature Almighty, God’s creation, demonstrated us its’ immense power in one quick act.
What is the aim of the UN, WEF and the rest of COP26 mob? To limit global warming to 1.5 degrees Celsius, by year 2050 or earlier. Where did this 1.5C figure come from? From nowhere, it has absolutely no scientific basis, it’s a fruit of “Climate Change” anti-science. But still – in order to achieve this noble goal and, among other things beautiful, to save Arctic ice cover and Arctic wildlife, we must plunge ourselves into unspeakable misery, by rationing food, power consumption, by reducing our living standards to something below medieval ones (except elites – they must live in their luxury, or how else could they save the planet?). Well, Nature did the job and saved Arctic in several months, without exterminating the mankind.

The same “science” is behind “pandemic-vaccination” narrative. It’s lies upon lies upon lies, and globalism maniacs, trying to enforce on us New World Order.
I ask all shipping so-called “leaders” – what is all your “green sustainable zero-emission” crap about? I answer the question I asked – it’s not about saving the planet from non-existent threat, it’s about your precious selves, your despicable careers, your petty self-interests, your greed, your cowardice. Same goes with “pandemic” and mandatory “vaccination”.
You’re committing crimes against humanity, all of you:
1. Your insane and criminal “zero-emission” policies are making basic supplies so costly, that they become inaccessible, endangering lives of hundreds of millions of people worldwide, pushing them beyond the limit of survival;
2. Your mandatory “vaccination” policy, driven by your greed and cowardice, is killing and maiming seamen – how many died, how many will die or be crippled, we don’t know.
I can go on with the list.
I remind you, that no man on this Earth, ever, from Biblical times until now, escaped punishment for his wrongdoings, for his sins and crimes. You’ve already committed unforgivable crimes, and still keep committing them. For all your luxuries and multi-million profits, I won’t change places with you. You’re doomed, already. You’re walking dead.

List of Shame (Update) – it will become List of Most Wanted one day, I’m sure of it.

Dec 3: Meet one Richard Meade, the Editor of Lloyd’s List.

Nov 30 New Arrivals:
Meet Hugo De Stoop, CEO of Euronav: “We agree with the International Chamber of Shipping (ICS), the MEPC 77 is a big disappointment and a missed opportunity”.
I don’t know if he really is that stupid, to believe in man-made Climate Change, but won’t be surprised if he is.
Advise everybody concerned to look through major CEOs pics, bios, speeches, statements. They’re all alike – happy thoughtless faces with standard imbecile smiles; same words, same statements; total lack of personality – they’re effectively, transhumans, biorobots, zombies. That’s what modern West and shipping believe to be the cream of the cream?! Ultimate humans? Ubermensch? I’m at a loss – am I to cry, to laugh or to pray? Do you understand, shipping, what a fucking circus your “leadership” is?

Meet GARD, one of the most progressive companies in shipping, “the largest marine insurer in the world”, and concurrently, the spearhead of most destructive policies shipping ever faced, from crews obligatory “vaccination” to “Green Sustainable Shipping”. https://www.gard.no/web/updates/content/32700265/after-cop-26-where-are-we-with-decarbonisation-of-shipping

One more non-commercial non-governmental full of good progressive scumbag – meet ShipItZero “campaign, led by an alliance of environmental organizations including Pacific Environment, STAND.earth, and Sort Your Ship Out”. https://shipitzero.org/who-we-are/
How do they replicate and multiply, so fast? Or are they fabricated by some giant factory somewhere inside WEF/UN? Like the one which fabricated orcs in Lord of the Rings?