Aug 26 UPDATE: Operator of tanker, World Tankers Management (WTM), issued a statement, refusing all the claims and allegations against tanker and crew, made by both Cambodia authorities and Indonesia. WTM statement, basically, confirms my yesterday’s analysis of the situation.
World Tankers Management (WTM), operators of the STROVOLOS, issued a statement denying claims the crew were loading barrels of crude illegally without permission to anchor in Indonesian waters.
“We wish to highlight the impact on humanitarian issues of the approach taken by Cambodian and Indonesian authorities, where wrongful allegations made against the crew have resulted in refusals to enable a lawful crew change,” they said.
World Tankers Management said it believed the cargo belonged to the charterers of the STROVOLOS, who it claims failed to pay for the hire of the vessels or supply it with fuel.
“The charterers’ default meant that we and the crew had no realistic choice but to sail the vessel to the nearest appropriate port, Map Ta Phut, Thailand, to refuel for the safety of the crew, ship and the cargo. While the vessel was there, we tried to undertake a crew change as many of the crew had remained on board since September 2020 and they required to sign off and return home to their families.  In the meantime, the charter was terminated and the vessel was withdrawn from its chartered service,” they said.
WTM said the Royal Thai Navy boarded the STROVOLOS on the request of the Cambodian government but, after lawyers, the International Maritime Organization and the Bahamas Maritime Authority intervened the navy agreed to allow the vessel to sail to Batam to change crew. It says Cambodia was made aware of the plan.
Operators said they had asked the owners of the oil to remove it by ship-to-ship transfer at a convenient and practical location, but no agreement was reached. “Regrettably the vessel and the crew have been subject to unfair and unreasonable interference by and at the behest of the Cambodian Government and this has caused the crew immense distress and suffering,” WTM said.
WTM denies that the vessel did not have permission to anchor in Indonesian waters. “ It seems that a key factor why the vessel was targeted was because of the wrongful allegations made by the Cambodian Government that the vessel and its crew had committed criminal offences in relation to the vessel’s departure from the Apsara field to refuel,” they said.
“We have been informed that Cambodian authorities have made an application to Interpol and the Cambodian Government is allegedly requesting that the crew be extradited to Cambodia. We now fear for the wellbeing and health of our crew.”
Operators  of STROVOLOS say they will “resort to diplomatic channels and the UN Human Rights Office” to free the crew.

Everything official, governmental, or MSM, is the last thing on my “trust” list. They went out of control, all throughout the world, during last year and a half. All they do is turned against us the people, all they do is harmful or deadly. There’s almost no law left, lawlessness is ruling the world and the waves. Those in power, providing they have enough strength including military, to support their lawless actions, commit crimes including crimes against humanity, all around, in any given region or country. Collapse is near, and maybe it’s for good. Better horrific end than endless horror.

UPDATE: I vaguely remembered that there was an incident in Thai waters involving laden tanker from Cambodia, sometime during Summer, so I checked local sources. It took a while, but I found the story. I didn’t publish it back then, because there was no clarity in what exactly happened. There is still no clarity, but at least more facts emerged. Rogue tanker on the run with 38,000 tons of crude on board isn’t something we watch every day, at least yet. Tanker STROVOLOS entered Thai waters and anchored in late June, without required formalities or due notice. The ship loaded crude oil at Apsara Oil Field, Khmer Basin in the Cambodian part of the Gulf of Thailand, and was to deliver it to Singapore, but found itself without enough supplies and bunker to complete the voyage, so she entered Thai waters, actually, being in emergency. Thai police and Navy checked the ship, Thailand meanwhile, was contacted by Cambodian Authorities requesting the return of fugitive tanker. According to local sources, Thai authorities agreed to cooperate. Tanker reportedly, received the supplies she badly needs, including fuel, water and food. And here the story ends. What happened later, was tanker taken to Cambodia forcibly, or fled Thai waters, is still a mystery.
More details emerged today, making the story a bit more transparent:
Says Bangkok Post: …The tanker had been rented by Singapore’s KrisEnergy for storage as part of Cambodia’s recent bid to extract its own oil, Indonesian authorities said. But the company was unable to pay its debts and filed for liquidation in June, still allegedly owing money to the tanker crew, they added…
There’s little doubt that this KrisEnergy company indeed, owes money both to ship’s owner and crew, and probably, desperate situation crew found themselves in, plus possibly, owner’s incentive, triggered the incident. Obviously, Cambodian authorities have no sympathy towards crew or owner, their main objective being oil and money, so there’s little hope the incident will be investigated with due impartiality, and crew treated fairly. No hope at all, to put it bluntly.

Product tanker STROVOLOS was detained by Indonesian Navy off Batam, Riau islands, Singapore Strait, on charges of carrying stolen crude oil originated from Cambodia; and illegal anchoring in Indonesia waters. Navy issued official statement on Aug 25, while tanker was seized on Jul 27, shortly after arrival. According to Indonesian sources, tanker is wanted by Cambodian Government for stealing some 40,000 tons of crude oil, respective notice having been sent to Indonesian Gov on Jul 24. Tanker AIS records history was obviously, tampered with, all records prior to Jul 27 2021 have been deleted. Tanker is manned with 19 crew, including 13 Indian, 3 Myanmar and 3 Bangladeshi nationalities. According to Navy, tanker arrived from Gulf of Siam.
Product tanker STROVOLOS, IMO 9178056, dwt 47106, built 1999, flag Bahamas, manager ? 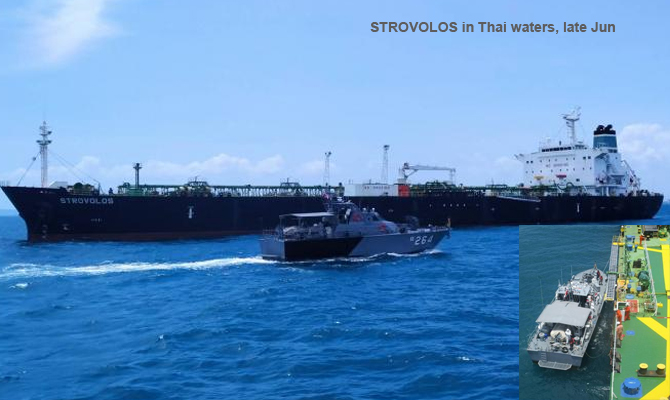 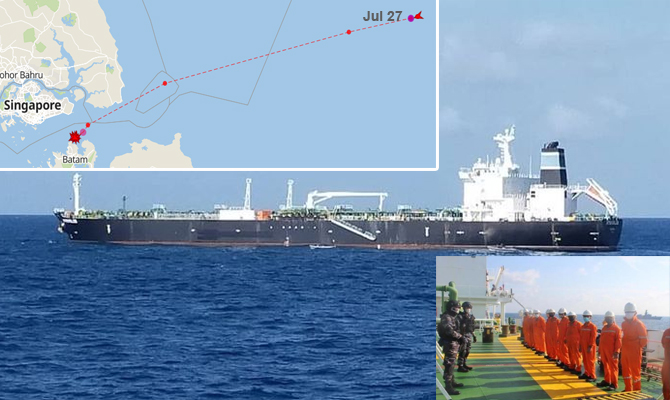