X-PRESS PEARL Jun 2 UPDATE: The ship, regretfully, is sinking or sank, she gave up after all, after severe damages inflicted by fierce fire. She’s sinking by stern with starboard list. Not much to worry about oil spill and all that – some or all fuel in tanks burned out, undoubtedly. Well, everything which can burn burned out, it seems, so there’s not much left to harm the environment with. Though of course, it won’t soothe or cool down “environmentalists”, this is their day. 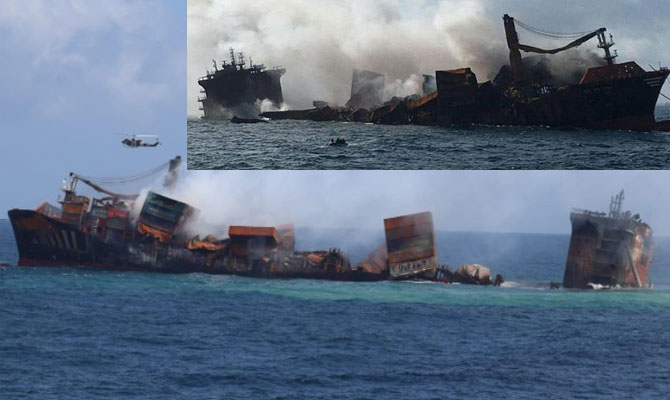 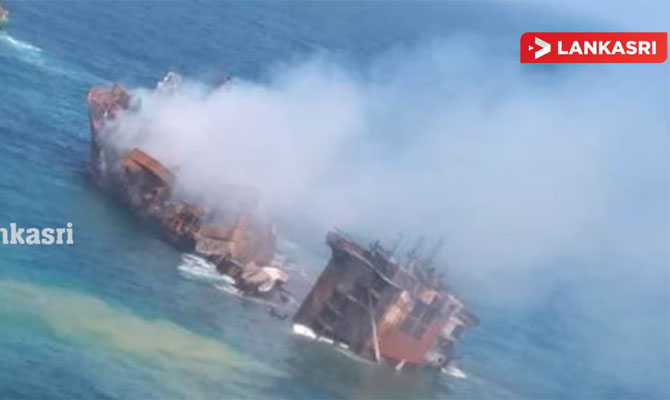 Jun 01 UPDATE
X-PRESS PEARL Jun 1: fire out, appalling photos
Jun 01 UPDATE: Fire on board of container ship X-PRESS PEARL is extinguished and the ship (the wreck of the ship) is already boarded by salvors. No doubt X-PRESS PEARL is a total loss, but thankfully, she was strong enough to to sink or break apart. Photos are simply appalling. 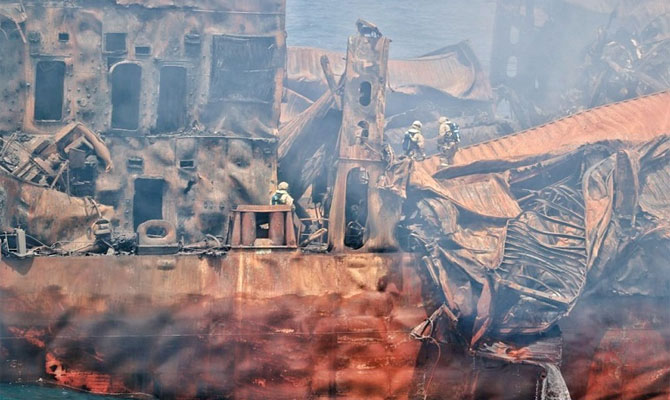 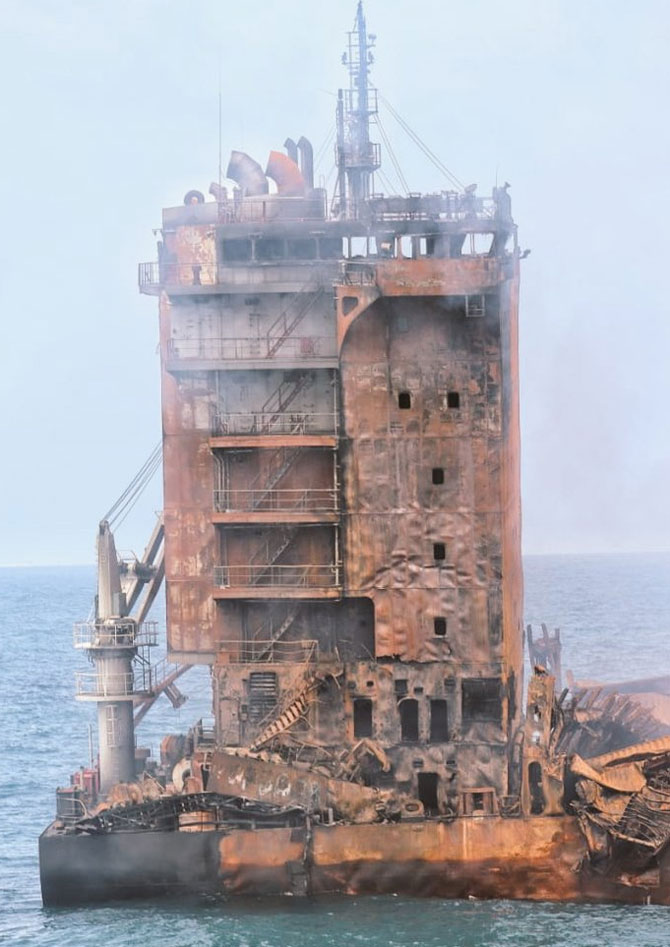 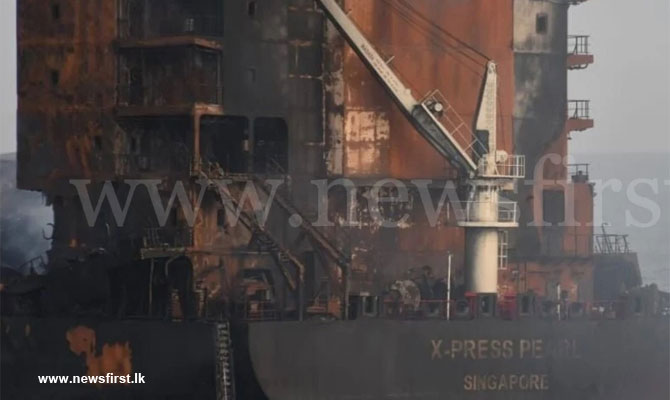 May 30 UPDATE
May 30 UPDATE: Latest reports of involved parties offer hope of escaping disaster – fire is slowly, but surely, retreating, leaving behind a total devastation, but the ship hopefully, won’t break apart or sink. The main goal of salvors and operator is to save the ship from sinking and with that, to avoid “ecological disaster”. Not that there will be some real, big-scale ecological event even if the ship sinks, but it will undoubtedly, throw owner into a near-disaster situation with multi-million worth “ecological” claims. Let’s hope it won’t happen.
X-Press Pearl – Incident Information Centre
https://www.x-presspearl-informationcentre.com/
X-Press Feeders, operators of the container ship X-PRESS PEARL report that firefighting operations to extinguish the blaze aboard the vessel have further reduced the area affected by flames to small spot fires in the aft of the ship.
Firefighting tugs will continue spraying and misting the vessel with support from the Sri Lankan Navy and Indian coastguard, who remain on scene. Salvors are also exploring the possibility of boarding the ship and making a tow connection so it can be moved.
As of 1100 Hours on May 30, 2021, Sri Lankan time, the salvors have confirmed that the vessel’s hull remains structurally intact, and there has been no loss of oil into the port’s waters.
Indian Coast Guard report:
ICG ships Samudra Prahari, Vaibhav & Vajra continue with firefighting onboard X-PRESS PEARL. The non-stop joint firefighting efforts have yielded positive results with increasing signs of fire being under control. Fire has considerably reduced with moderate density smoke. Aerial surveillance carried out by ICG aircraft. No oil spill detected. 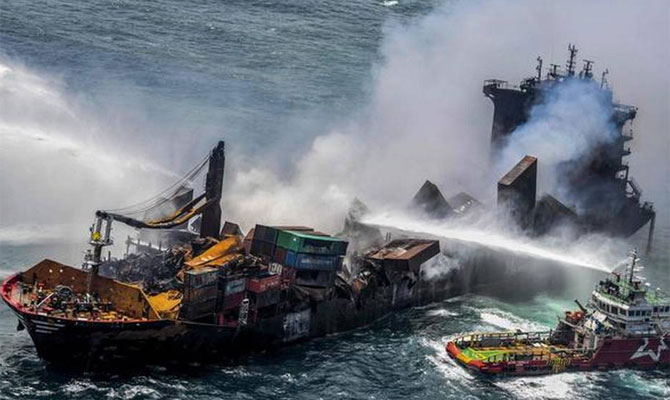 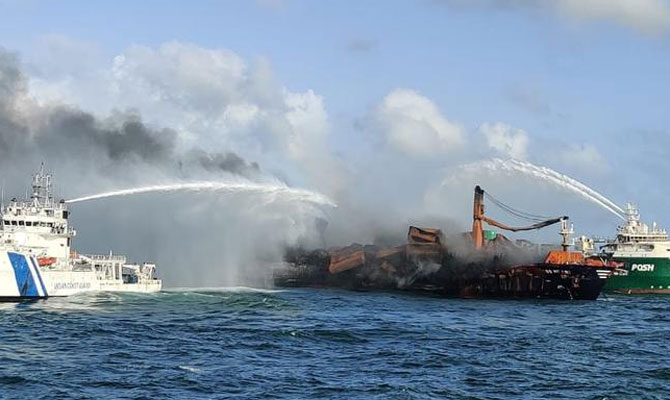 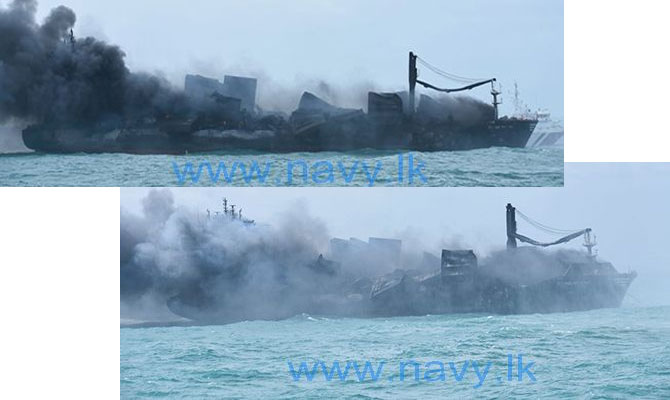 May 26 UPDATE: It seems like container ship X-PRESS PEARL will be a total loss, if photos are of any judgment. Fire engulfed about all of cargo deck and containers stacked on it, with containers continuing to fall overboard, according to Sri Lankan Navy May 26 update. Photos Indian CG. 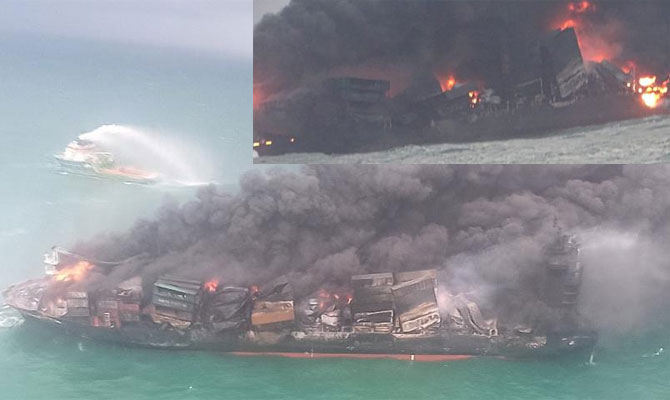 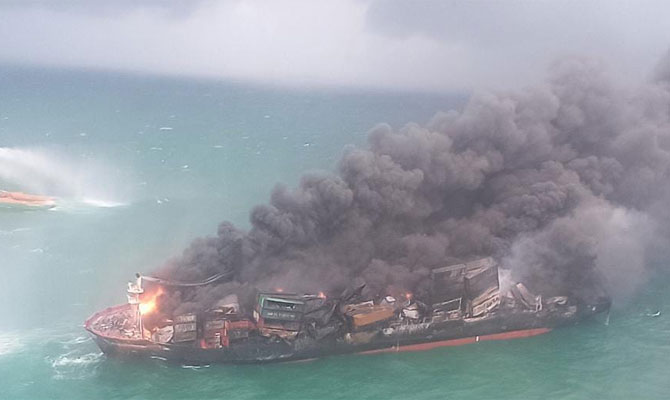 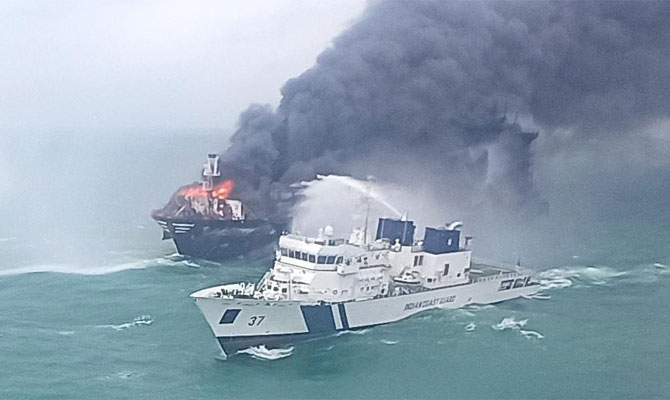 May 25 UPDATE
An explosion rocked container ship X-PRESS PEARL in the morning May 25, followed by fire. The ship is, according to latest pics, engulfed in fire and thick black smoke. All 25 crew were evacuated, 2 of them suffered burns. 8 containers fell overboard. The ship is surrounded by offshore tugs, tugs and Navy boats, firefighting continues, though probably, there’s little salvors can do now, fearing more explosions. 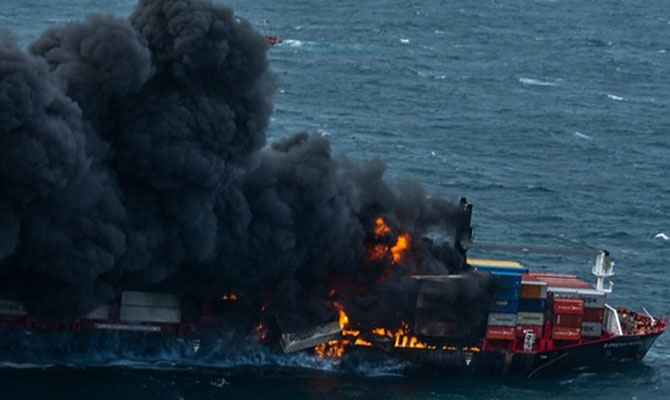 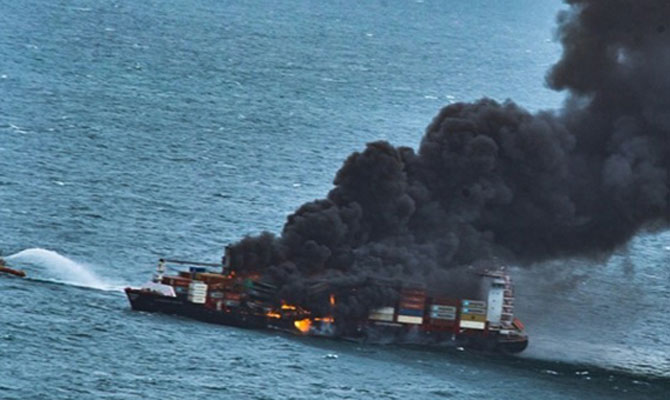 May 24 UPDATE: Four tugs are currently deployed in firefighting, including offshore tugs, plus Sri Lankan Navy ship and craft. Salvage company was reportedly contracted. The ship remains in the same position.

May 23 UPDATE: Firefighting continues with several tugs surrounding X-PRESS PEARL, Sri Lankan Navy ships are also deployed, firefighting operation is coordinated by Navy and Port Authority. A senior navy official said the intensity of the fire was increasing after leakage of the chemicals inside the vessel.
The ship remains at her position with all crew on board, she wasn’t moved outward further to sea, or out of Sri Lankan waters. Sri Lanka’s Marine Environment Protection Authority reportedly demanded that the ship should be moved out, outside Sri Lankan waters, but later corrected the statement, saying that “The priority will be to douse the fire and then move the ship to a safe zone before making any attempt to board the ship.”

Cargo in containers on board of container ship X-PRESS PEARL caught fire in the afternoon May 20, on Colombo Anchorage. The ship arrived at Colombo anchorage on May 19 from Hazira India, with 1486 containers on board, loaded among other goods, with nitric acid, other chemicals and cosmetics. Sri Lankan Navy is engaged in fire fighting, as of 0330 UTC May 21 the ship was in the same position, understood firefighting still continues, with deployment of tug or tugs, including offshore tug, and probably, Navy ships, too.
According to Sri Lankan Navy press-release, ship is manned with 25 crew, which includes Philippine, Chinese, Indian and Russian nationalities. The ship is brand new, she was built in China, started trading in Feb this year.
All photos courtesy Sri Lanka Navy.
Container ship X-PRESS PEARL, IMO 9875343, dwt 37000, capacity 2700 TEU, built 2021, flag Singapore, manager X-PRESS FEEDERS, Singapore. 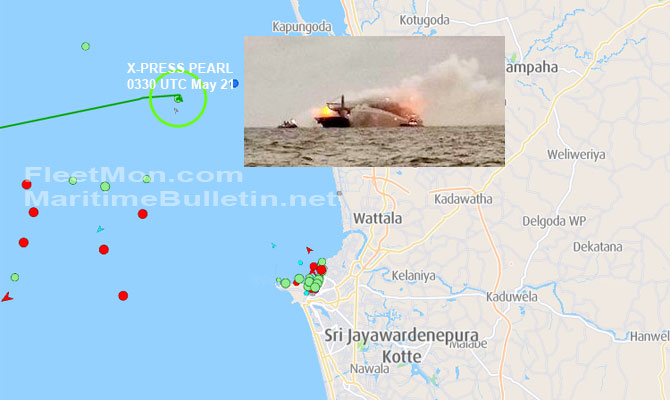 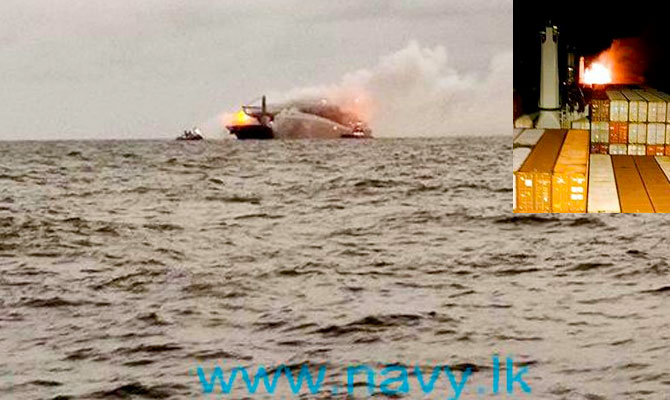 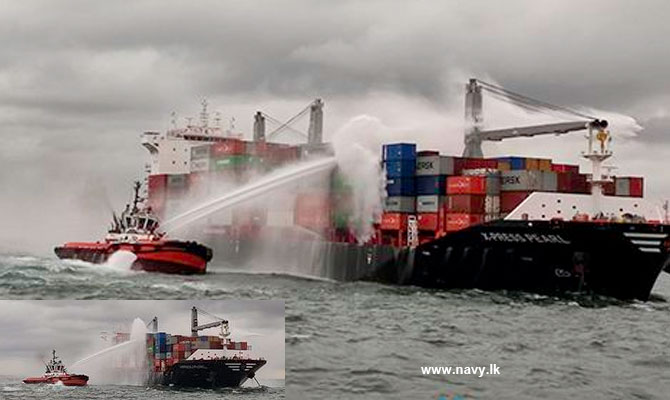 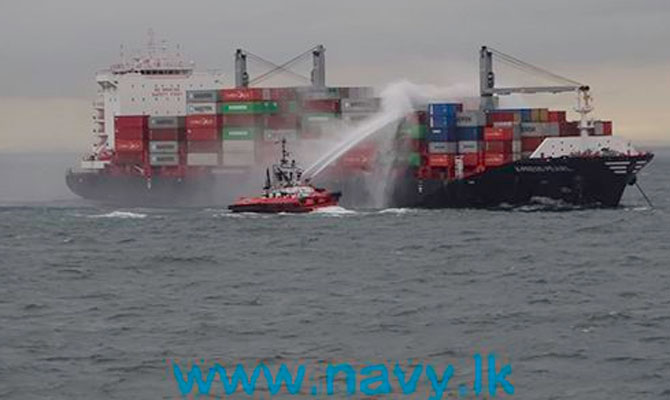