Dutch general cargo ship EEMSLIFT HENDRIKA issued distress signal in the morning Apr 5 in Norwegian sea 60 nm west of Olesund, Norway. Reportedly, the ship developed a heavy list after cargo shift. According to local media, 8 crew out of 12 were already evacuated, understood by helicopter. Salvage ships or tugs under way. 4 crew remained on board attempting to salvage the ship.

Apr 5 1730 UPDATE: The ship continues to hold on against strong wind and seas, moving in northwest direction, with 4 crew still on board, heroically doing what they can to save her from capsizing. The ship with cargo of boats on upper deck is en route from Bremerhaven to Kolvereid Norway, it is these boats which shift and caused heavy list. Nearest to EEMSLIFT HENDRIKA ship, fv VESTSTEINEN, is sailing nearby, to assist or save remaining 4 crew, if things come to worst. Let’s hope it won’t come to that, and brave four seamen will manage to save the ship by keeping her against rough seas until weather calms down and SAR ship arrives.

Apr 6 0400 UTC UPDATE: Last 4 crew had to abandon the ship because remaining on board was too dangerous and probably, engine had to be stopped due to developing list. They jumped into water and were rescued by helicopter. As of 0400 UTC Apr 6, the ship was adrift with operative AIS, drifting in southern direction.

Apr 6 1610 UTC UPDATE: Ship’s holds on all by herself, one of big boats, the biggest actually, went overboard, hence improving ship’s stability and increasing chance of surviving this ordeal. Norwegian CG ship is nearby monitoring situation. Salvage company was already contracted with reportedly, tug or tugs underway to distressed EEMSLIFT HENDRIKA. Ship’s AIS is on.

Apr 7 1100 UTC UPDATE: The boat which went overboard from EEMSLIFT HENDRIKA is a utility vessel AQS TOR, she survived the fall and is adrift and it seems, very well afloat. EEMSLIFT HENDRIKA meanwhile, is either adrift or already under tow, with two salvage offshore tugs nearby. Ship’s AIS is on. The weather is still unfavorable.
Utility vessel AQS TOR, IMO 9896957, GT 246, length 24 meters, built 2021, flag Norway.

Apr 8 0520 UTC UPDATE: Towage commenced at around 1830 UTC Apr 7 by offshore tug NORMAND DROTT (IMO 9447964) with escorting tug BB OCEAN, towline was handled by salvage team which boarded EEMSLIFT HENDRIKA from helicopter. EEMSLIFT HENDRIKA has been drifting south, approaching Norwegian coast, but as of now, grounding threat seemed to be avoided. According to NORMAND DROTT data, towage is heading towards Olesund. 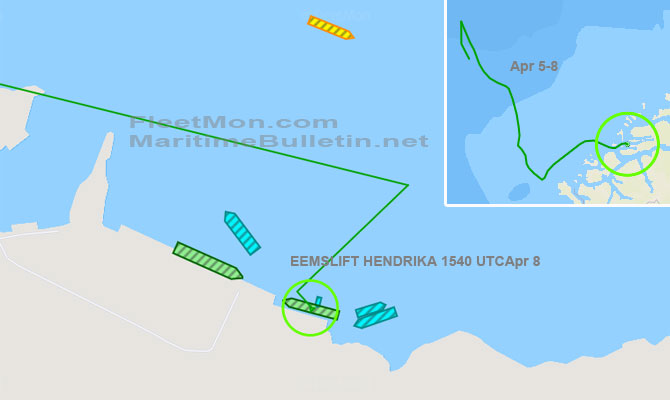 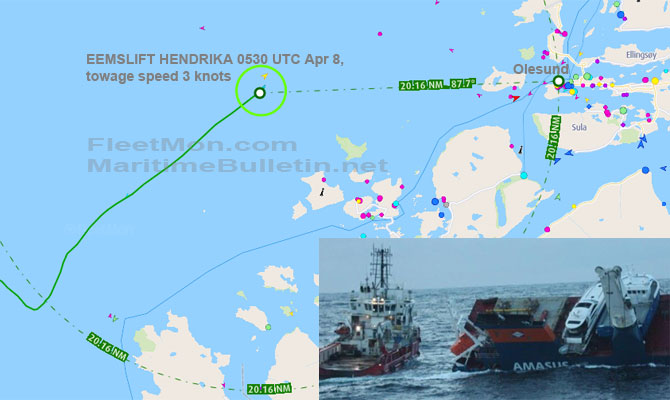 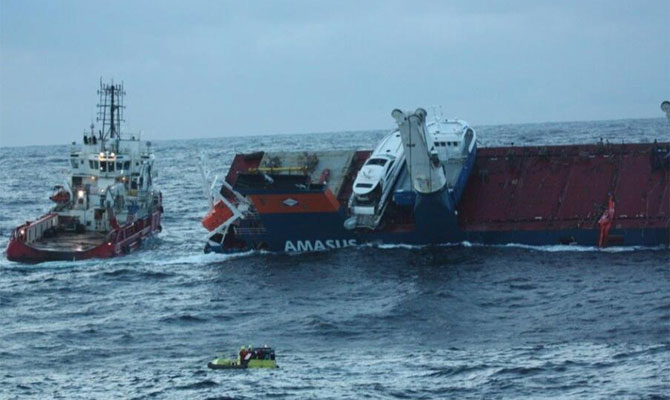 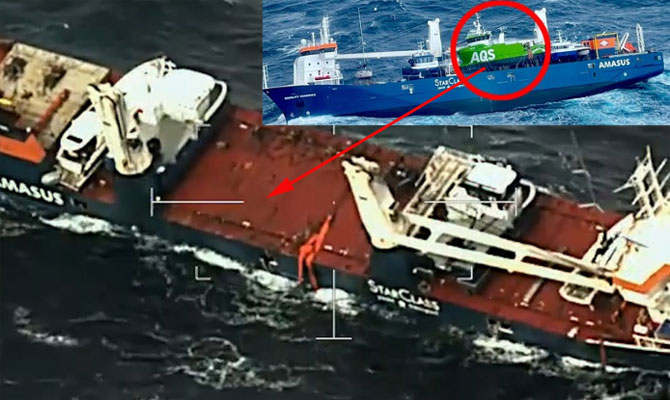