Ultra Large Container Vessel EVER GIVEN ran aground in Suez Canal north of Suez, at around 0600 UTC Mar 23, shortly after entering Canal in northbound convoy. As of 1440 UTC Mar 23, the giant ship was still aground with tugs attempting to refloat her. Traffic reportedly, is blocked in both directions. EVER GIVEN is en route from Yantian China to Rotterdam.

Mar 24 0415 UTC UPDATE: Still aground, traffic blocked, Canal authorities hope the ship will be refloated during the day Mar 24.

Mar 24 1530 UTC UPDATE: Several news and industry outlets reported that the ship was partially refloated and positioned alongside Canal’s bank, arising hope of at least partial, traffic resume. According to live AIS tracks of EVER GIVEN and other ships, it doesn’t happen yet. The ship is still blocking Canal, all northbound convoy vessels which followed EVER GIVEN and were blocked by her grounding, remain in their positions, and of course, there are no southbound ships transiting blocked leg. Of course the best temporary solution will be pivoting the giant ship to position her alongside Canal bank, and thus probably, allowing restricted traffic. The worst possible scenario will take place if attempts to move the ship fail, so that the lightering will be required.

Mar 25 0710 UTC UPDATE: As it can be clearly seen on an AIS screenshot dated 0702 UTC Mar 25, now salvors are trying to do exactly what I’ve been writing about in previous Update, they’re trying to spin giant with bulbous nose as pivot, and position her starboard alongside Canal bank. Probably, they’ll even manage to free bulbous nose and pull the ship out. Let’s hope their attempts will be successful and traffic will soon open, at least partially. We already witness wild speculations and rates upsurges, which are, basically, groundless. Even if Canal is blocked for weeks to come, in worst possible scenario, global fleet has enough excessive capacities to re-direct cargoes and bypass Suez, without substantial rate increase, providing of course, it will be allowed to do so.

Mar 25 1615 UTC UPDATE: EVER GIVEN still stuck, 2 dredgers were reportedly, deployed, but non are seen on AIS screens, only tugs. The last ship of northbound convoy blocked by EVER GIVEN, container ship MAERSK DENVER (she was right behind EVER GIVEN in the convoy), has been relocated back to Red sea, probably to be anchored at Suez anchorage, during Mar 25.

Mar 26 0720 UTC UPDATE: No changes, EVER GIVEN in the same position surrounded by tugs, and no dredgers visible, unless they aren’t fitted with AIS.

Mar 27 0810 UTC UPDATE: No changes, EVER GIVEN in the same position surrounded by tugs, dredgers said to be deployed and working on site. There’s a strong hope, that the ship will be refloated or positioned alongside Canal bank, in the coming days. 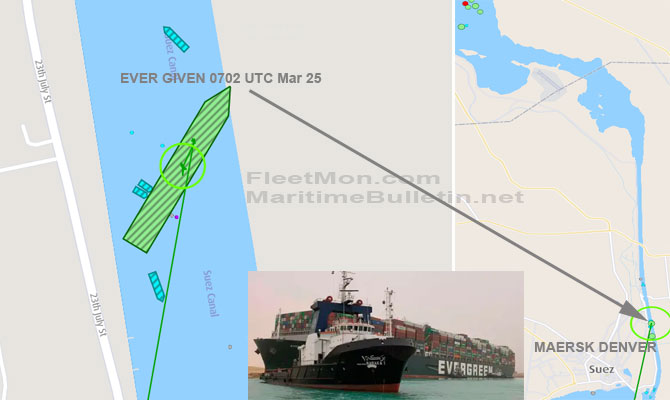 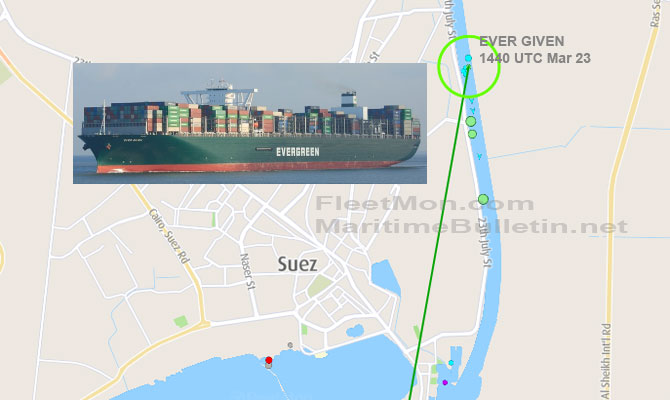 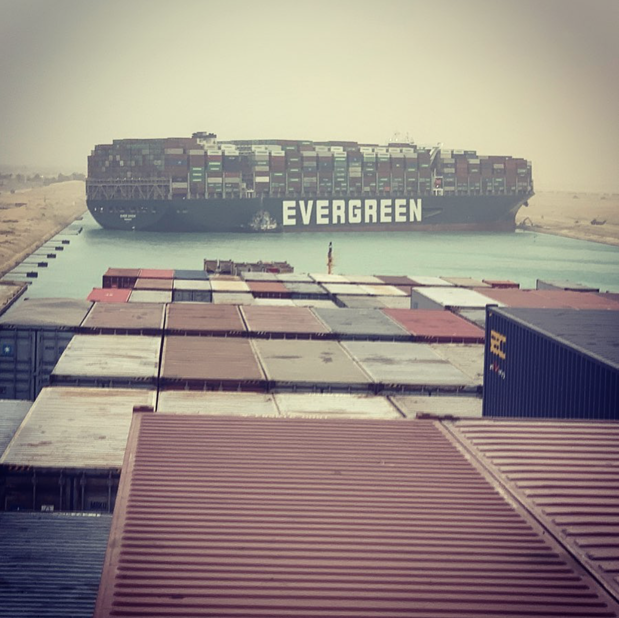