Self-discharging bulk carrier TERTNES asked for medical assistance northwest of Stavanger on Feb 24 while en route from Gulen Norway to Dover UK. Helicopter transferred two medics on board of bulk carrier, to assist sick crew, Captain of the ship, but he unfortunately, died. The ship was diverted to Stavanger, arriving there on Feb 25. Deceased Captain tested positive for virus, albeit post mortem. All 18 Filipino crew (understood except Captain) were tested twice since arrival, 7 tested positive, all 7 being in good health without any symptoms of anything. Of course, they’ve been all tested by a notoriously unreliable PCR test. Norwegian health authorities didn’t specify the cause of Captain’s death, saying only, that “ they can’t confirm death was caused by covid”.
All the crew are isolated on board, being under quarantine. Medics who boarded the ship are also under quarantine. Pilots who boarded the ship last 6 times are also under quarantine. And finally, for good measure, funeral agency staff, and Captain’s relatives attending funeral, were also arres… sorry, quarantined.
Why don’t Norway quarantined all ships in all its’ ports, and all planes which were in Norway airspace at the time of an accident? To stay on the safe side, you know. Like NZ does. Absolute insanity.
P.S. There is no known to me CONFIRMED case of seaman death on board caused by virus, since the time “pandemic” started last year.
Self-discharging bulk carrier TERTNES, IMO 8315554, dwt 11546, built 1985, flag Bahamas, manager CSL NORWAY AS. 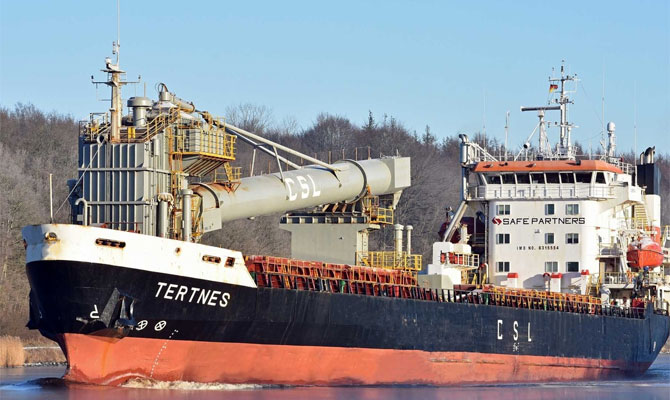