By now, everybody in shipping whom it may concern or interest, know about a new “big oil spill”, which occurred in Graciosa Bay, Tematu Province, Solomon islands. Bulk carrier QUEBEC crew is accused of dumping 1,000 tons of heavy fuel, during her stay at Lata between Jan 20 and Feb 11. Solomon islands authorities firmly believe, that “this is deliberate pollution of our seas. It’s not accidental”.
The director of the Solomon Island Maritime Authority, Thierry Nervale, told state media an initial assessment of the Quebec spill indicated about 1,000 tonnes of heavy fuel oil had been discharged, and that the government would pursue legal action against the vessel’s owners.
Many mainstream media promptly responded by reposting a new environmental sensation. Some of industry media followed the hysterics, without any shred of doubt or scrutiny.

I made a short alert for my subscribers only (some of them are interested in environmental news, because of character of their occupation) on the day the news first appeared in regional media outlets, but didn’t make it public, because didn’t find it serious and trustworthy enough:
Feb 12: Bulk carrier QUEBEC is a suspect in oil spill in Temotu province waters, Solomon islands, during her stay at Lata between Jan 20 and Feb 11. Bulk carrier allegedly, dumped overboard sludge and oily wastes after cleaning engine room, according to locals complain. Bulk carrier was arrested, but shortly after, released, Master, owners and insurer are being subject to further prosecution and investigation. A claim is filed, to be taken to court. Understood bulk carrier was loading timber.
Bulk carrier QUEBEC, IMO 9044425, dwt 28451, built 1991, flag Panama, manager FENG SEA SHIPPING PTE LTD. Fuel oil capacity 1,234 m3.
As of Feb 24, QUEBEC was still anchored off Honiara, Guadalcanal, capital of Solomon islands, meaning that “investigation” of this horrific crime is still under way.
Now, according to initial news, published by no one else but Solomon islands, citing nobody else but Solomon islands Maritime Authority, some 1,000 liters of heavy fuel oil were spilled:
“”What we understand is they mismanaged in the engine room while cleaning the vessel… they opened a fire hydrant on deck and the pump discharged the oil into the sea,” he said.
The director of the Solomon Island Maritime Authority, Thierry Nervale, told state media an initial assessment of the MV Quebec spill indicated about 1,000 litres of heavy fuel oil had been discharged, and that the government would pursue legal action against the vessel’s owners”
Not exactly 1,000 liters of heavy fuel, though. According to locals complaint, oily water and probably, some cleansing wastes, were dumped, not a pure heavy fuel.

In a matter of days, 1,000 liters of fuel miraculously expanded to whooping 1,000 tons, and what’s more, the spill accident is now qualified as “deliberate” pollution, not a negligence or mismanagement.
https://www.sibconline.com.sb/graciosa-bay-oil-spill-deliberately-done-assessment-reveled/
Some of mainstream media returned to their senses and corrected 1,000 tons back to 1,000 liters, like UK’s The Guardian, though the link still says about 1,000 tons:
https://www.theguardian.com/world/2021/feb/18/solomon-islands-ship-crew-accused-of-dumping-1000-tonnes-of-oil-in-sea
It’s not the case with some industry media, like this one:
https://splash247.com/solomon-islands-hit-by-another-big-oil-spill/
The majority of industry media smelled a rat and didn’t cover this story. The minority did, in its’ constant pursuit of politically correct, virtuous sensations, with predicted outcome of any such story – owners and FOC practices are to blame, providing owners aren’t untouchable major giants.

The whole concocted story of ecological crime is a joke, an anecdote. To begin with, total fuel tanks capacity of QUEBEC is 1,234 m3, including heavy fuel, diesel oil and lubricants. That is to say, that QUEBEC crew, if we’re to believe official narrative, dumped all of fuel they had. I wonder how did they manage to sail from Temotu to Honiara – on a prayer; on makeshift sails or oars? But even that wasn’t enough for QUEBEC hardcore criminals and maniacs – they first, spilled the fuel on a cargo deck, and second, washed it overboard using fire hydrant. Quite an undertaking, if you ask me. Couldn’t they, at least, save themselves so much trouble and hardship, and pump the oil overboard directly from tanks?
What about media and experts? Why didn’t they check the facts, look a bit further into the story? I guess, they’re long, if ever, incapable of such an intellectual strain.
To make their lives even easier than it already is, they it seems, invented a totally new measurements system, most simple among all known to mankind. Their system includes two units only – that of their office coffee cup, and everything which is bigger, be it a liter or a ton or 1,000 tons, or infinity. If a volume of any liquid spilled overboard is exceeding number one unit – their coffee cup, it is undoubtedly, an ecological disaster. Very simple and very convenient system of measurements.

Once again, I address ship owners and managers – why don’t you push back? Resist in any available legal form? You hope that the “respectable” industry media will come to your help, one day? Of all industry media I know, only one, Manifold Tines of Singapore, is, from time to time, opposing the official psychotic narrative, and publishes the statements of smeared by mainstream companies (WAKASHIO case, as an example). The rest are either actively colluding with globalists, or at best, keep as low as they can – but never go against, even in most innocent manner. As for me and my MB, we’re of course, anything but respectable, and I’m never tired of thanking God for that. Your sense of respectability is that of a slave or a lackey.
WEF/UN/EU/USDems are, as of now, after your business. After they grab/ruin it, they will come after your savings, assets, apartments, villas, yachts, etc. They steal your children with their anti-human “education”. They openly declare their intentions, this isn’t a “conspiracy theory”, go read their own documents or listen to their speeches. Theirs’ is a conspiracy, yes, but debunking them is no “conspiracy theory”, it’s a sheer, frightening, statement of facts, it’s a truth. You’ll finish up in slavish misery, but who can say that you don’t deserve it? You deserve it, 1,000-ton percent. 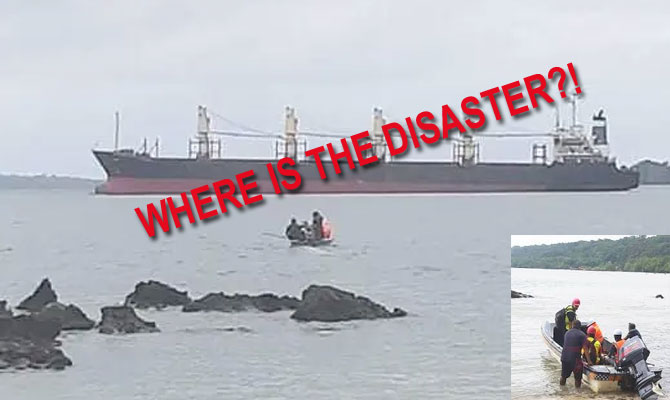