General cargo ship APRIL requested urgent medical assistance, reporting mass poisoning on board on Feb 19, while en route from Taganrog Russia, Azov sea, to Samsun, Turkey, Black sea. At the time of emergency the ship was in Azov sea, approaching Kerch Strait. 5 crew were poisoned, 1 of them died, the character of poisoning remains unknown. MRCC Russia ordered APRIL to anchor in Kerch Strait, to evacuate the crew, after talks with ship’s owner, who agreed with the evac decision and is fully cooperative. It is not clear if all the crew are to be evacuated, or only those who suffered poisoning. If all the crew are to be evacuated, it means most likely, that the poisoning was of chemical character, probably caused by faulty cargo fumigation. If only those poisoned are to be medevaced, it may mean food or alcohol poisoning. Evacuation was hampered by unfavorable weather, tug MERKURIY tasked with evacuation, was at ship’s side at 1330 UTC Feb 19, situation unknown.

UPDATE: Sick crew won’t be medevaced by tug or pilot boat, because of foul weather. As soon as weather permits, APRIL will be towed to Kavkaz port, Kerch Strait, and berthed. According to latest official press-release, 6 crew out of 8 (all of Turkish nationality) are ill, so that’s maybe the reason the ship will have to be towed. According to officials, food poisoning is a primary version, but not yet confirmed. Other versions, like alcohol poisoning or accidental leak of hazardous gas, aren’t yet excluded. 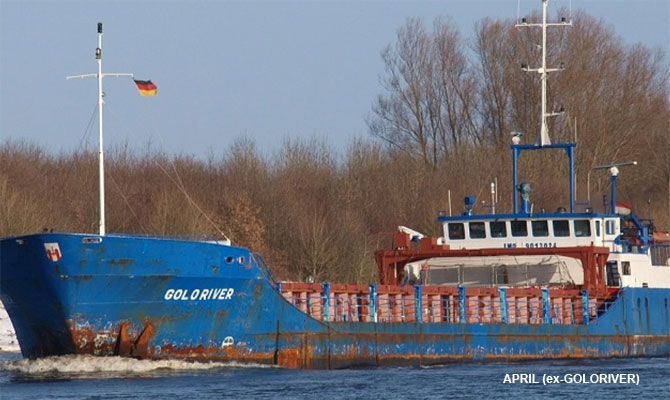