Mass crew poisoning occurred on board of Thai bulk carrier LANNA NAREE, according to local news source citing MFA statement. News are rather confusing and contradict ship’s track and records. According to tracks and records, the ship was in Indian ocean SSE of Maldives, en route from Thailand via Singapore to Puerto Rico, food poisoning took place on Feb 5-6. LANNA NAREE changed course and steamed to Male, Maldives. She arrived at Male on Feb 9, it is said, that 18 crew were poisoned, 1 of them died. All sick seamen were later transferred to Thailand, understood by Feb 10 replacement crew arrived at Male, crew replacement and repatriation operation was carried out with the help of Thailand MFA. LANNA NAREE left Male on Feb 11 and resumed her voyage.
Number of medevaced and repatriated crew was probably, less, than stated.
Bulk carrier LANNA NAREE, IMO 9496939, dwt 33843, built 2012, flag Thailand, manager PRECIOUS SHIPPING PCL. 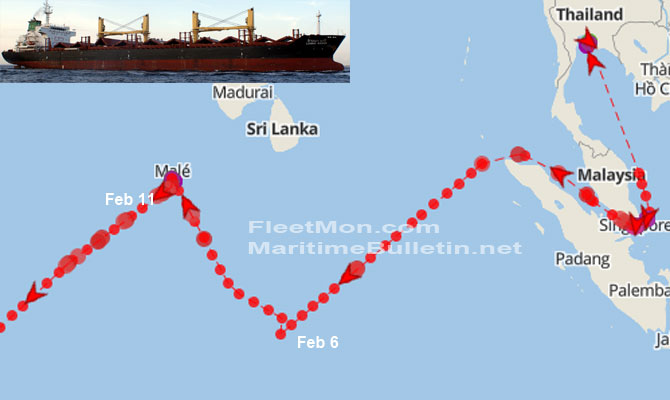