Crews must be among the first in line to be jabbed with vaccine, worldwide, said industry “leaders”. Not all of them, but some. As of now, end of November, the first maritime organization to come up with this idea, seems to be Nautilus International trade union. Several days later, Union of Greek Shipowners joined priority vaccination campaign – yes, it looks like it’s a new industry-leaders-run campaign: first to recognize seamen as “key workers”, and second, to stab them with vaccine needle as soon as possible and as simultaneously as possible, “leaving no one behind”.
Why such urgency?
“This (vaccination) will ensure … bla-bla…, as well as the facilitation of crew changes and repatriations, which at the moment are seriously disrupted. It would also ensure “uninterrupted international trade”.
Hence the idea of turning all crews and ships into lab rats and testing grounds.
I heard and read a lot of opinions on trade unions and Greek shipowners. Same stories and same conclusions. This appeal to carry out urgent mandatory inoculation of all crews just adds up to opinions total, and more.
So-called “Round Table”, embracing BIMCO, ICS, INTERCARGO and INTERTANKO, wholeheartedly supported the idea during its’ last meeting, and went even further, bowing to inglorious monster Jeff Bezos, one of the main beneficiaries of pandemic hoax and main driving forces behind anti-human Great Reset agenda, by pathetic plead to “stand for the 400,000 seafarers stranded at sea and exert pressure on the incoming Biden administration in the US and other world leaders to recognise seafarers as key workers”.
Vaccination as a silver bullet
So, the scheme is very simple – seamen are to be recognized as “key workers”, in order to facilitate and prioritize their (mandatory) vaccination. Shipowners want to reduce skyrocketing operational costs and crew change costs, and bypass restrictions and regulations, which make crews change operation almost an impossible undertaking in many countries. All of them want it, but at what cost? Some of them want it at any cost, even if it means endangering health and lives of their crews, by injecting them with something very suspicious and potentially, very dangerous.
For “Maritime organizations” and of course, for trade unionists, mandatory vaccination is a silver bullet, to solve several problems by just one shot (well, literally a shot, a jab). They have to stick to WEF agenda, i.e. to obey their true masters, and WEF order is loud and clear – to make vaccination mandatory (and with that, legitimate) for as many groups of people, as possible. They will solve the crew change crisis (or so they believe). Some other, minor in comparison, problems, also will be solved or eased, by seamen mandatory vaccination, under the pretext of “caring for our seafarers”.

What’s really important, to think and worry about?
Here are the issues we have to keep in mind, to take into consideration when assessing all the attempts projects, aimed at crew change crisis solution:
First and foremost – if there’s the best proof of “pandemic” being a hoax, it’s shipping itself, ships and crews. Be “virus” anywhere as deadly as we were promised by all the cabal, from WHO/WEF to Fauci to Rockefeller 2010 Report, at least half of world merchant marine fleet would be by now, a “ghost fleet”, full of dead and dying crews. I personally, recall some 3 cases during last 11 months, when allegedly, crew member died from virus. Not one of these cases was confirmed, but at least one was refuted.
There’s no “deadly pandemic”, and there’s absolutely no need in any and all restrictions and “tests”, let alone vaccinations.

Secondly, it’s vaccine itself. Vaccine and mandatory vaccination, for all we know, might be and will be really dangerous for humans:
The vaccine, developed and endorsed by Anthony Fauci and funded by Bill Gates, uses experimental mRNA technology. Three of the 15 human guinea pigs (20%) experienced a “serious adverse event”.
Who’s to help seamen who’ll experience adverse side-effects of the vaccine, on board of the ship, thousands or hundreds of miles away from nearest medical aid? What will happen to ship, if 20% of the crew will fall ill because of vaccines? Do Greek shipowners give a thought to a possible grim outcome of an overall mandatory vaccination? Or any other shipowner, who believes that crews vaccination will end his, shipowner’s nightmares and miseries caused by “pandemic”? What will you do, idiots, if vaccine will, massively, cause “adverse side-effects”? Bill Gates openly admitted the danger of his vaccine. Dozens of people in South Korea died after being vaccinated with “flu vaccine”, not yet “covid vaccine”. Sweden is experiencing huge problems with flu vaccine, Singapore suspended flu vaccination, after Korean and Swedish horrific experience. Are you absolutely nuts, to vote for, and facilitate, mandatory vaccination of people, who might fall ill without any available medical aid for days and weeks, isolated on board of a ship on high seas?

There’s thirdly, one more consideration, non the less important than previous two. What about our peoples free will, as owners of our bodies and health? Our lives, our bodies, our freedoms are God-given rights, not something “authorities” allow us to have. Take a look at WEF monsters, at Klauss Schwab, or Bill Gates, or walking dead Biden, or your nation’s “leaders” and politicians – at any of them including shipping self-proclaimed “leaders”. Ask yourself – do they look like gods to you? Who or what empowered them to command us what we can and can’t do and possess, including our own health, our own bodies and life itself? They think they’re empowered, they think themselves to be gods, but they are something quite the opposite. All they deserve is immediate neutralization of all their activities, investigations and trials for the crimes they already committed, and keep committing.
Nobody knows the outcome of mass worldwide mandatory vaccination, including those who’re brewing this hellish vaccine. Maybe the first jab won’t be deadly or too adverse. What about next ones? What about WEF solemn promise, that the whole lockdown/masks/distancing/vaccination regime is forever? What about UN/WEF widely and openly advertised aim of reducing world population, and controlling the number of humans, in that green sustainable future of their? Their final goal, their ideal figure is 500 mil. Down from present 7.8 billion. Do your math.

Time to show true colors and to check who’s worth what
What’s the best policy in this worldwide situation, if one cares about his people and himself? Why, to avoid vaccination, to dodge it by all means possible, legal and illegal, until the moment injection becomes absolutely unavoidable, or carried out by sheer force of military or police. Mandatory vaccination, itself, is inherently illegal – so there’s nothing to be considered as “illegal” in avoiding illegal action which may harm you or kill you. I am not naïve and I don’t call for any radical jab refusal, it’s simply impossible for the crews. But delaying the vaccination in order to buy time to see how did it affect, and what “side-effects” triggered in those, who willingly subjected themselves to vaccination, is the most reasonable, sensible way, under the circumstances.
Vaccination policy may become the best litmus to check the shipowner or manager or crewing agency – if vaccination is their priority, is on top of the “must” list for their crews, it means simply, that they care about their profits more than they care about their people. A very sound reason to give such company a wide berth, and keep clear. If company is responsible and honest, it will do everything possible to postpone or avoid crews vaccination – it’s nothing but prudence, caution, common sense and good judgment. No honest, responsible, God-fearing person, will ever advocate for the oncoming mandatory vaccination, because it may well turn into mass murder, genocide of unprecedented scale, dwarfing all your WWI-II horrors, and because, after all, there’s no need for vaccination, at all.
It doesn’t take a rocket science to assume, that the next amendments to inglorious MLC will make vaccination mandatory – mind you, not openly. It will be sold as a “benefit” for seamen, and a “must” for owners. Trade unionists are real good in selling lies and fakes, that’s in fact, their main trade, main product. But there’s nothing much to talk about with regards to trade unionists and “maritime bodies”, anyway. They crossed good-evil line long, long time ago. I’m sure many of them are afraid, really scared of what’s going on and of their own actions, but they don’t have courage to say “enough!” and walk out.

Walk out, now
Here’s a landscape we’re in – mandatory vaccination seems to be inevitable, but it won’t happen all around the globe simultaneously, there’s time to buy and space to move to avoid/delay it. For seamen, it is more difficult than for the majority of other people in other professions and industries, because of obvious reasons. Still, seamen, those who understand what’s at stake, can delay vaccination for as long as possible, watching meanwhile, the results of first mass vaccinations wave.
The best way out, as it all stands now, seems to be just that – way out is a walk out, leaving seas for good, to live through hard times on the land at home with your loved ones. This absolutely satanic, purely evil, all false and lies, agenda, this New World Order, just can’t stand for long, it’s a walking dead monster. I don’t know what event or events exactly will bring NWO, WEF and all the cabal down, nobody knows, but it can’t last long, that’s the only thing I’m sure of. So, I wish all stay safe from vaccinations/masks/distancing/lockdown war on humanity, and pray for best, pray for I don’t know what, for a divine intervention probably, because – as it seems now – we can’t handle ourselves. We let hostile non-humans to take over and rule us. We’re a disgrace and disappointment, frankly.

I am not going, any more, to embed into my articles videos which debunk the continuing crime against humanity, be it “Climate Change” hoax, or “Pandemic” hoax. You’re all grown-ups doing tough man’s job, so you have to do your thinking yourselves. All it take is to make a little step out of toxic swamp of mainstream, and find around you a real world – bright, full of real red-blooded people, not walking dead monsters or mannequins, the world which is resisting New World Order and new world Masters. You may not join resistance, but at least you’ll be able to fact-check mainstream BS, and with that, detox yourself.
www.bitchute.com – best free speech video platform
Professionals speak out, everyday expert analysis of vaccinations and “pandemic” at Europe Reloaded.com:
https://2020news.de/en/dr-wodarg-and-dr-yeadon-request-a-stop-of-all-corona-vaccination-studies-and-call-for-co-signing-the-petition/
https://www.europereloaded.com/covid-mrna-vaccine-damage-irreversible-hesitancy-is-widespread-even-among-medical-professionals/
https://www.europereloaded.com/media-hypes-modernas-covid-vaccine-downplays-risks/ 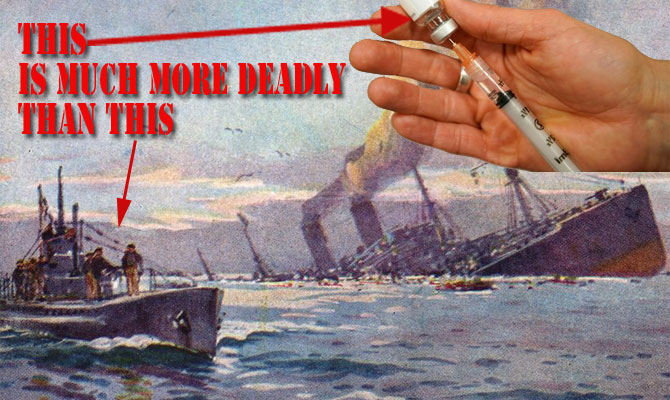