Venezuelan VLCC tanker AYACUCHO, changed flag early May this year, finding rather unusual substitute, now she’s registered under Russian flag and got a Russian name MAKSIM GORKY, though understood, she’s still operated by Venezuelan interests. All of sudden, this news hits today Russian top headlines, and a number of Russian mainstream outlets already called me, asking for interview. Russia has two Registers, one being International Russian Register, open for non-resident foreign companies. Venezuelan VLCC was registered in this second register, so for all purposes, VLCC may be considered registered under a FOC.
What’s the purpose of it? I guess, it’s mainly the question of security, to avoid US sanctions and probably, seizure. Russian flag may provide such protection, or may not, who knows. The feeling is, many States including rogue ones, believe the US to be much weaker than it was even 6 months ago, and justly so, thanks to Dems, BLM, “pandemic” sabotage, and general turmoil.
Tanker is presently, in South Atlantic, sailing in southeast direction, and marked as “Waiting for Orders”. She left Venezuela in early September, probably in load.
Crude oil tanker MAKSIM GORKY (ex-Ayacucho), IMO 9590008, dwt 320840, built 2013, flag Russia, manager ? 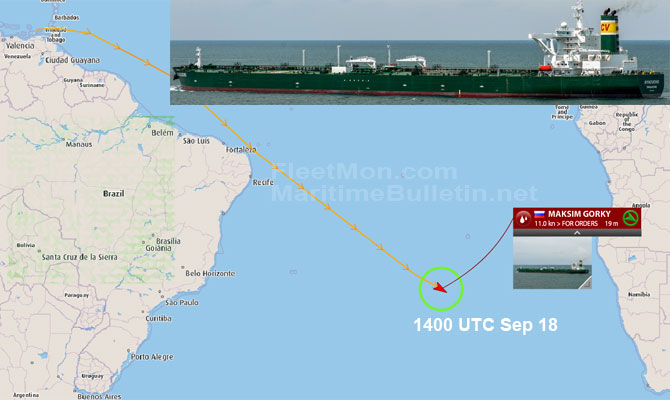