Offshore supply ship KARAR was intercepted by Spanish law enforcement near Canary Islands, and escorted to Vigo Spain, where she arrived on Apr 28, with 15 crew and 4 tons of cocaine, loaded somewhere in the Caribbean. The ship was monitored for understood, months, prior to arrest, while anti drug multinational operation, which led to ship’s seizure, was launched some 6 months ago. Understood there is or are gangs, offering large-scale drugs transportation by ships, from Central-South Americas to Europe. KARAR isn’t the first such case, there were at least 3-4 similar cases in recent years, each involving sea-going ship, transporting tons of cocaine. Except crew, 12 more people were arrested in Spain. Crew includes 14 Bangladeshi and Nepalese nationalities, and 1 Spaniard.
Offshore supply ship KARAR, IMO 9009322, dwt 1200, built 1991, flag Togo. 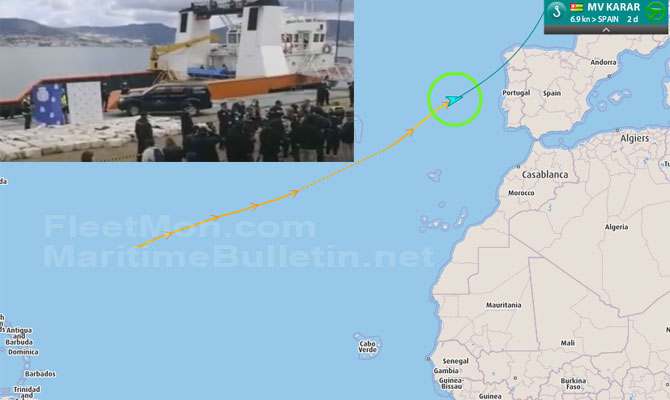