UPDATE Apr 21: Benin and Nigerian forces reportedly boarded the ship early in the morning Apr 21, finding the ship free of pirates. 11 crew sheltered in citadel are safe. 8 crew who were taken hostages are missing, presumably kidnapped by pirates. Benin and Nigerian authorities didn’t provide any other details. If what they said is true, pirates fled the ship with kidnapped seamen. How did they slip between surrounding TOMMI RITSCHER Benin and Nigerian naval ships, is a mystery. Hopefully, 8 missing seamen are indeed, kidnapped by fleeting pirates, safe and sound. Hopefully, nothing happened to them during Benin/Nigerian spec-op.
Earlier today MB received an inside info, not yet confirmed though seemed highly likely, that in the afternoon/evening Apr 20 the ship was about to be stormed by Benin and Nigerian special forces. Ship management asked Portuguese respective authorities to intervene and suspend the attack, fearing it may lead to crew casualties, though doubting, whether Portuguese authorities will intervene and put in enough pressure. Negotiator was already contacted to negotiate with pirates.

UPDATE Apr 20: As of morning Apr 20, situation didn’t change much, according to latest Dryad update. Understood there’s a standoff between deployed naval/security forces, including Nigerian, and pirates on board, who’re holding 8 crew as hostages and bargain chips.

UPDATE 1300 UTC: According to Dryad Global information, it is understood, that the speedboat from which pirates boarded container ship, fled seeing approaching Naval ship, leaving pirates aboard. 11 crew mustered in citadel, 8 crew remained in the open and are believed to be kept by pirates as hostages. There are Russian and Bulgarian nationalities among crew. 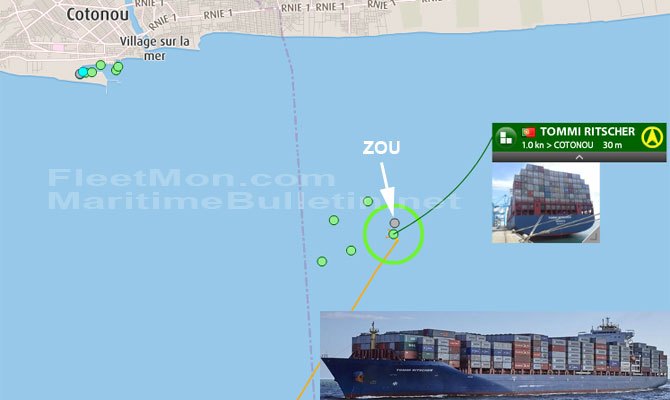