WESTERDAM the Flying Dutchman: Feb 12 latest
Feb 12 UPDATE 1: According to HAL statement, cruise company reached an agreement with Cambodia Government, WESTERDAM was granted entry to Sihanoukville, Cambodia, Gulf of Siam, and permission for all passengers to disembark. All passengers are expected to go to Phnom Penh, and fly to their homes, all travel costs including air tickets to be covered by HAL. Expected Time of Arrival at Sihanoukville is around 0000 UTC Feb 13.

Feb 11 UPDATE1: Thailand Prime Minister Prayut Chan-o-cha in an official statement made at Government House at 1318 LT Feb 11, confirmed ban on WESTERDAM entry to Thailand, saying that though Thailand is sympathetic with people on board, but Thai nation safety comes first. Thailand is ready to provide ship with all necessary supplies, including food and fresh water. Ministry of Transport meanwhile, hinted there were some news on sick people on board of WESTERDAM, though it seems to be highly unlikely.
Incubation period of virus for WESTERDAM expires on Feb 15, so if there are no suspicious cases by this date, it means actually, that all people on board are virus negative. Understood countries in the region don’t want to allow the ship to dock, fearing it will develop into something like cruise ship DIAMOND PRINCESS nightmare still unfolding in Japan, but still, this is no excuse to turn innocent people into pariahs, locked on board of modern Flying Dutchman.

Feb 11 UPDATE: Thailand will not allow WESTERDAM to disembark passengers at the Laem Chabang port, Public Health Minister Anutin Charnvirakul said on Feb 11. Mr Anutin posted a short Facebook message saying he has directed authorities not to allow the Westerdam ship to dock in Thailand. The message was posted after the operator of the vessel announced on Feb 10 the ship will disembark passengers at port in Chon Buri on Feb 11, Kyodo News reported.

Feb 10: Hapless cruise ship WESTERDAM with 2257 people on board has become a Flying Dutchman, a ship from techno thriller movie – she’s rejected entry by country after country, port after port, and her present port of destination is unclear. The ship is (was) on a 14-day Taiwan & Japan cruise, she departed Hong Kong on February 1, with 1455 passengers and 802 crew on board. WESTERDAM was scheduled to call Japanese Ishigaki Island, Naha, Okinawa, Nagasaki and Fukuoka (Hakata), and complete her cruise in Yokohama on February 15.

That cruise had been canceled shortly after it started, after the Japan banned WESTERDAM from visiting any port in the country. The ship headed for Manila, but she was banned while approaching Manila. There are no ill persons on board, no symptoms of any disease, but Philippines temporarily ban travellers from China, Hong Kong and Macau from disembarking in the country. After some time spent on high seas, on Feb 4 she arrived at Kaohsiung Taiwan, to be expelled from Kaohsiung next day, for the same reason of coming from Hong Kong, based on the same fears.

Holland America, apparently, did her best to save the cruise, and sent the ship to Guam, but also was denied entry by Guam governor, notwithstanding the request from US State Department to grant entry.
As of morning Feb 10, WESTERDAM is steaming in South China sea in southwest direction, port of destination not identified. It may be Vietnam, it may be Thailand, it may be Singapore. The problem is, the ship has to dock somewhere sometime soon, she can’t sail oceans forever, like a Ghost Ship from legends. 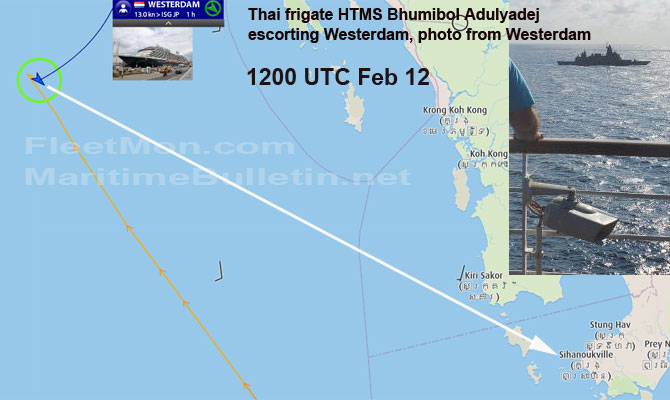 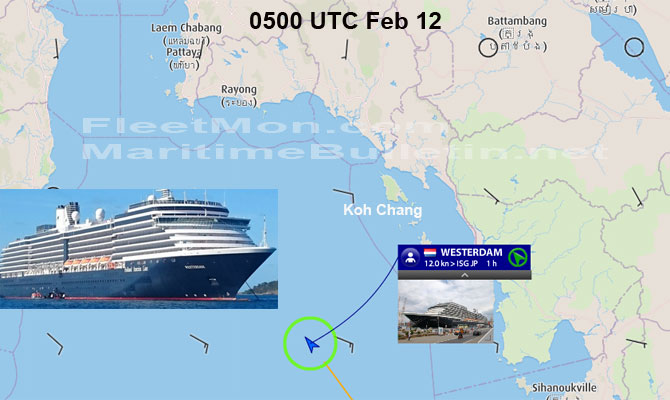 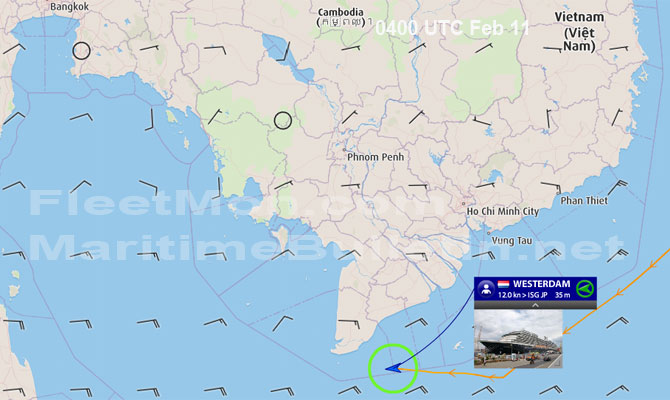 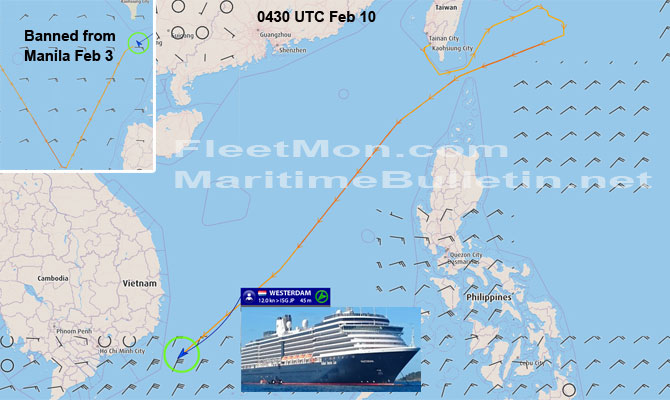