Product tanker HARALD MAERSK on Feb 8 had to interrupt her voyage from Conakry to Amsterdam (via Las Palmas and Algeciras), and make emergency call at Vigo Spain, because of 3 extremely aggressive stowaways on board. They’ve been found reportedly, on Feb 7, and shortly after, their violent behavior disrupted crew activities and demanded immediate enforcement response. Tanker was boarded by Spanish Immigration Police officers, who took situation under control and stayed on board throughout Feb 7-8 night, because tankers can dock at Vigo only during daytime, and therefore, HARALD MAERSK had to spend the night at sea. Tanker berthed at Vigo in the morning Feb 8, and as of 0500 UTC Feb 9, was still berthed, investigation under way.
Vigo Police have some doubts about the whole story – Police said, that merchant ships are often ordered by owners to simulate dangerous situation on board after finding stowaways, in order to get rid of them, and all costs and troubles they bring.
How very nice! Merchant ships are to blame? They don’t want to sail around with stowaways on board, and falsely blame innocent migrants for being violent and dangerous?

Mass migration is becoming all the more interesting in light of coronavirus outbreak, and virus accelerating spread throughout the world. Crews of merchant ships are least contagion risky people among all those who move internationally, thanks to a number of factors, including regular health checks, emergency quarantines and shore leave bans. Migrants are most risky in this regard (well, as in many others), and still, they’re the only one class of people, which is free to cross borders without any papers and any checks. Borders exist – at least in the West – for law-abiding and hardworking people, like seamen, but not for migrants.
If there’s any sanity left in this world, it’s definitely not a western world.
Product tanker HARALD MAERSK, IMO 9389502, dwt 38004, built 2009, flag Denmark, manager MAERSK TANKERS. 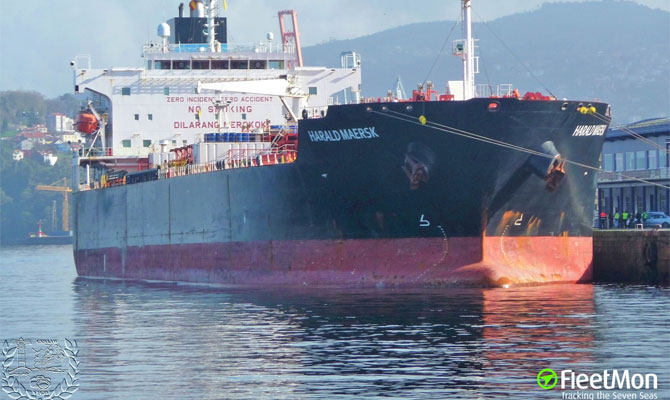