General cargo ship LIAN FENG 18 ran into trouble in the evening Jan 19 in waters bordering provinces Fujian and Guangdong, China, southern Taiwan Strait. The ship reported developing portside list, 10 Myanmar crew in need of rescue. About an hour and half later all 10 crew were rescued by passing nearby ships and then transferred to SAR ship, SAR coordinated by MRCC Zhangzhou. LIAN FENG 18 remained afloat, anchored. She was still afloat as of morning Jan 20, no news on situation development since Jan 20. The ship was reportedly en route from Kaohsiung Taiwan to Busan Korea, but according to track, while being well into East China sea and sailing in northern direction, LIAN FENG 18 made an U-turn on Jan 15 and sailed in opposite direction. She went off AIS on Jan 17, being abeam of Tancheng, Chinese waters, northern Taiwan Strait.
General cargo ship LIAN FENG 18, IMO 8410873, dwt 1599, built 1985, flag Togo, manager HEBO GULF SHIPPING CO LTD (EQUASIS). 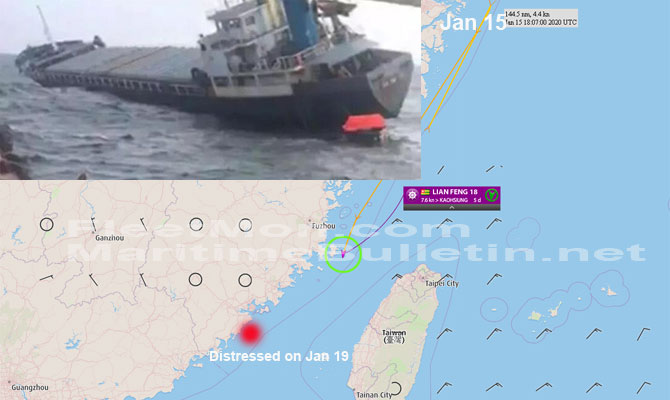