UPDATE: Clearwater Dynamics shared its’ information with Maritime Bulletin, not disclosing ship’s name, but there was no other container ship in the vicinity, fitting into time and position, except MSC GRACE. The ship is deployed on container service connecting Gulf of Guinea States, so no wonder she has armed guards on board. As of 1630 UTC Jan 21, the ship was sailing in Bonny area, heading towards Port Harcourt.

Clearwater Dynamics Alert:
Nigeria
It has been reported that a container ship has been attacked whilst underway approximately 45nm West Southwest of Brass, Nigeria. A black speedboat with a white flag and 15 armed pirates onboard, fired upon the vessel and then moved away. The Nigerian authorities have been notified. UPDATE: It has been confirmed that the container ship did have an onboard security team, who returned fire which resulted in the pirates aborting their attack. During this incident the crew retreated to the Citadel.

An unidentified ship was attacked in the morning Jan 21 in Gulf of Guinea, some 75 nm WSW of Bonny. The ship nearest in time and position was container ship en route to Port Harcourt. There’s a lap in AIS track. There are many fishing vessels around, too. Awaiting ship’s ID and more information. 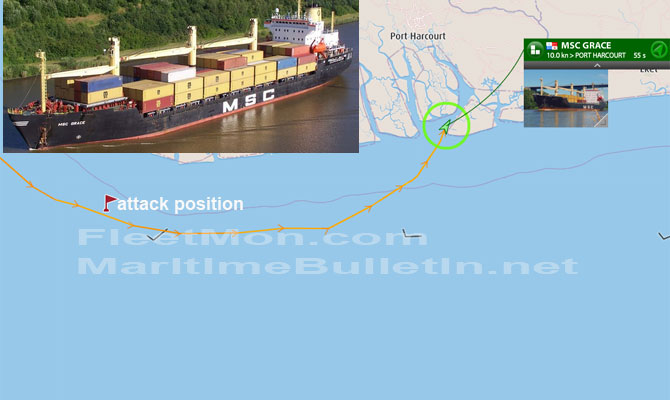