UPDATE: According to informed sources, cruiser transited Bosphorus without any trouble on Jan 5 and was anchored off Istanbul, waiting for daytime Jan 6 to berth at Sarayburnu pier in Istanbul, as a part of Russia’s President Putin Turkey visit program. Cruiser failed to berth because of strong wind and heavy rain, and returned to anchorage. Visit https://twitter.com/Saturn5_ for more details and updates.

Comment: There are no news in Russian media, mainstream and else, that cruiser was to make a stop in Istanbul, in connection with Putin’s visit. All what was said was “sudden cruiser’s trip to Syria, called by region’s growing tension”, something like that. As of Jan 6, there are still no news on cruiser Turkey visit.

Analysis: Been talking to seamen who transit Bosphorus more often than they cross the street they live in, all of them said the wind isn’t all that strong, nothing out of ordinary, including mist or rain. Watching video, pay attention to stb anchor, veered down and then heaved up again. All in all, it looks like some mechanical problem most probably with steering gear. It’s what it is – a failed berthing operation of one of the best Russian Navy ships (she’s branded with title Guards ship – meaning in general, “best of the best”), during her visit to a foreign country, timed to State’s head visit.

Russian missile cruiser MARSHAL USTINOV ran into trouble while transiting Bosphorus on Jan 5 in southern part of the Strait near Kabatas area, apparently going out of control and moving towards shore and piers. Understood Strait’s traffic safety tugs saved the day, took Russian cruiser under control and led her to Moda anchorage, southeast Istanbul, Marmara sea, just outside the Strait. Cruiser reportedly was anchored. Not much information available, including of course, tracks. Cruiser was/is en route from Black sea, Sevastopol Naval Base most probably, to Syria, with an order to “assist in stabilizing situation in the region”. Not much of assistance, judging from Bosphorus transit. More of a menace to all around.
Russian Navy Slava-class missile cruiser MARSHAL USTINOV, displacement 11280, commissioned 1986, crew 476, armament missiles, guns, torpedoes, helicopter, Russian Black sea Navy Fleet. 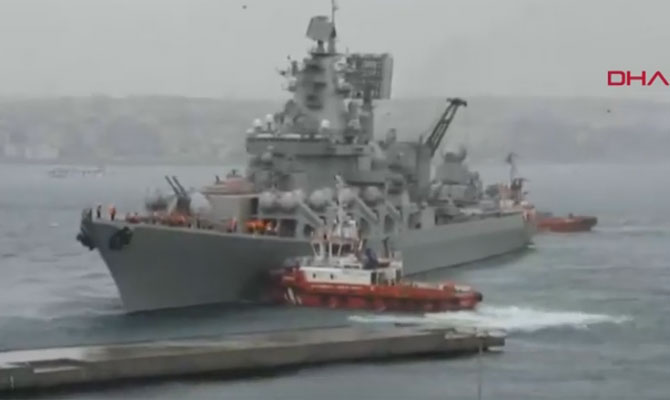