Bulk carrier VINALINES MIGHTY reportedly was attacked at around 0130 UTC Dec 30 in Gulf of Guinea some 150 nm NW of Sao Tome, 200 nm SW of Bonny. Identity of attacked ship not yet conformed. If it’s VINALINES MIGHTY, her track shows with high probability, that she avoided attack and escaped. Bulk carrier is en route from Douala Cameroon to Greenville Liberia. Awaiting ship’s ID confirmation and further details. One more bulk carrier could be in the same area, her last AIS as of 0600 UTC Dec 30, was some 14 hours late.

UPDATE: Ship’s ID confirmed, it’s VINALINES MIGHTY. Dryad Global reported that the ship was boarded by 3 pirates, but “all crew are safe”. So details of an attack are still unknown. But everything point at crew being safe, and that’s what matters most.

UPDATE 1: According to Dryad Global information, crew mustered within citadel with the exception of the captain who remained in charge of the vessel. The pirates are understood to have engaged in a brief firefight with the Nigerian navy personnel on-board and then withdrew. 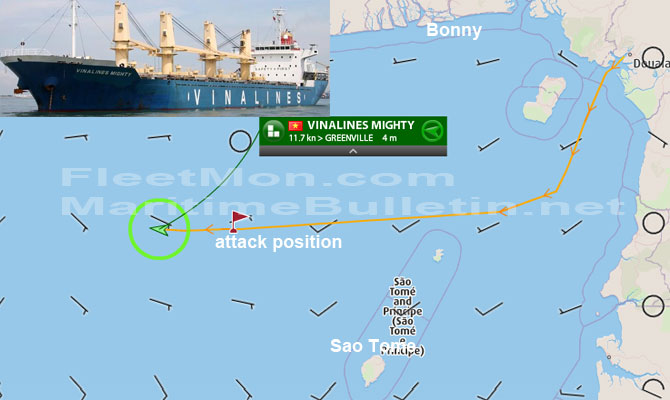