General cargo ship KAZIM DEDE while en route from Alexandria to Aviles Spain in central Med south of Crete, reduced speed early in Dec 24, still maintaining her course. In the morning Dec 25 she changed course and headed to Crete, reporting to Greek authorities, according to Greek CG, that Master and one more crew are in need of medical assistance. The ship reached Kalo Limenes bay, southern Crete, early in the morning Dec 26. Master and crew member were transferred to hospital, the ship anchored at Kalo Limenes bay, and as of evening Dec 26, remained in the same position. Detention was mentioned, though it is not clear why and on what grounds vessel could be detained under given circumstances. It is not known also, what happened to Master and seaman, did they fall ill, or was it an accident.
General cargo ship KAZIM DEDE, IMO 9171371, dwt 9861, built 2000, flag Panama, manager DADAYLILAR DENIZCILIK NAKLIYAT, Istanbul. 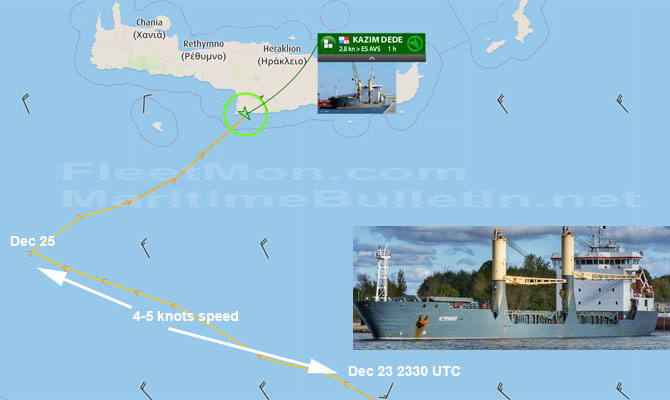