Three ships were attacked by pirates in Singapore Strait early in the morning, and late at night, on Dec 20, reported South East Asia piracy watchdog ReCAAP ISC:
– On 20 Dec 19 at about 0532 hrs, bulk carrier JIAN FA was underway in the Singapore Strait bound for China when an unknown number of perpetrators boarded the bulk carrier. At about 0700 hrs, the ship informed Singapore VTIS that a search on board the ship was conducted and there was no sighting of the perpetrators. Nothing was stolen. All crew are safe and the ship resumed her voyage.
– On 20 Dec 19 at about 2325 hrs, tanker JAG LALIT was underway in the Singapore Strait bound for Kaoshiung, Taiwan, China when six perpetrators armed with knives boarded the ship. The 4th Engineer was punched in the face; while the chief engineer sustained bruises on the neck and had a gold chain stolen from him. Upon the ship’s arrival in Singapore, the Singapore Police Coast Guard boarded the ships for investigation and verified that all crew are safe.
– On 20 Dec 19 at about 2338 hrs, bulk carrier AKIJ GLOBE was underway in the Singapore Strait when five armed perpetrators were sighted in the engine room. The alarm was raised and upon hearing the alarm, the perpetrators confronted three crew in the engine room. The five perpetrators escaped with stolen engine and generator spares in a boat. The Singapore Police Coast Guard boarded the ship upon arrival at Singapore anchorage. All crew was safe.
Bulk carrier JIAN FA, IMO 9132868, dwt 46489, built 1996, flag Panama, manager HUAXIN SHIPPING CO LTD.
Crude oil tanker JAG LALIT, IMO 9297905, dwt 158344, built 2005, flag India, manager GREAT EASTERN SHIPPING CO LTD.
Bulk carrier AKIJ GLOBE, IMO 9293105, dwt 53125, built 2003, flag Bangladesh, manager AKIJ SHIPPING LINE LTD, 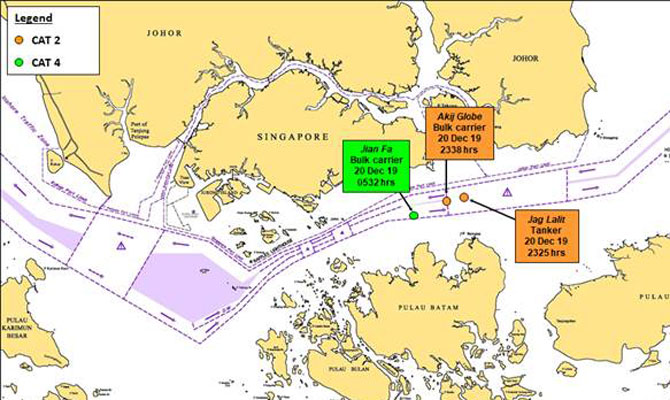