Chennai December 16, 2019
MV Duke IMO 9262259 Attack: Update 1
V.Ships Ship Management (India) PvT Ltd., managers of the oil/chemical product tanker “Duke” confirm that following the attack by pirates 110 miles off Benin on December 15, a Togo naval patrol boat has made contact with the vessel. A further tug with new sea-staff, including a Master, is proceeding to the MV Duke with a Naval escort, to resume command of the Marshal Island flag tanker.
It is also confirmed that 20 crew members, all Indian nationals, were abducted from the vessel, leaving one Nigerian cadet on- board.
Owners and Managers are working closely with all the appropriate Authorities and specialists to secure the safe and speedy release of the crew members being held, this being the upmost priority.
Families of those kidnapped are being informed of the situation.
No operational details will be provided going- forward that might jeopardise the safety and safe return of those being held.

Chennai, December 15, 2019
MV DUKE IMO NO.9262259: Hijack
V.Ships Ship Management (India) PvT Ltd., managers of the oil/chemical product tanker “Duke” report that contact was lost with the vessel in the early hours of this morning (15/12) local time. The Marshal Island’s flag vessel was some 110 miles SE of Lomé, Togo, where she was heading for discharge a cargo of fuel oil loaded at Luanda.
It is understood from the IMB piracy reporting centre and MDAT-GOG that there was a pirate attack between 0700 hrs- 0800 hrs local time involving kidnap of the crew leaving one Nigerian cadet on-board. It has yet to be confirmed that this attack involved the MV Duke which has a crew of 20 Indian nationals on-board and one Nigerian national.
Owners and Managers of the MV Duke are working closely with the relevant local Authorities and Flag State to try to establish contact with the vessel and crew, their well-being and safety being the prime focus and concern at this time.
Managers are contacting the families of crew members to keep them fully informed on the situation.
Further information will be provided as it becomes available. 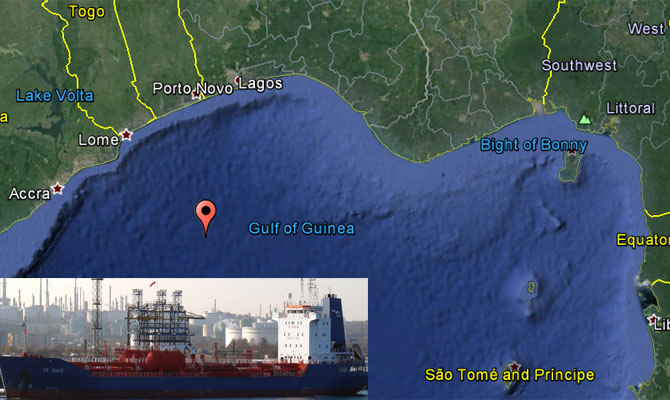