VLCC SILVANA III was spotted by Malaysian Maritime Enforcement Agency (MMEA) in Kuala Kuaru waters, south of Penang island, Malaysia, on Dec 5. Tanker was anchored without permission, when MMEA patrol boat approached the ship with the intention of boarding, ladder wasn’t lowered, tanker heaved anchor and left anchorage, thus violating the whole bunch of Malaysian regulations and laws. She’s to be detained when and wherever possible.
Tanker left Singapore Anchorage on Nov 27, bound probably for Fujairah, but port of destination information can’t be confirmed. On Dec 2 the ship turned to Malaysian waters, probably encountering some mechanical problems, because she reduced speed from full to slow. No AIS track since Dec 2, until early Dec 10. Ship’s latest known position is dated 0230 UTC Dec 10, due W of Penang, sailing in NW direction at a reduced speed. According to most databases, tanker is in service, but some mark her as “Decommissioned”. If that’s the case, then probably, she’s on her last voyage to scrape yard. She changed owner in early 2018. on the other hand, considering all the fuss with ghost tankers delivering crude to China, she may well be one more such tanker.
Crude oil tanker SILVANA III, IMO 9183348, dwt 291312, built 1998, flag Panama, manager KUNLUN SHIPPING CO LTD Shanghai (EQUASIS). 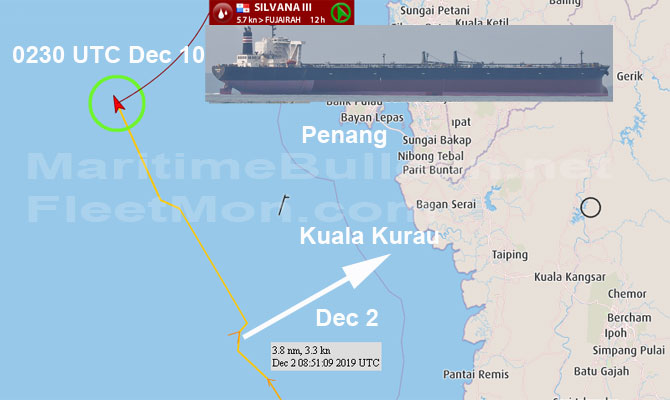