I’ve received following report on a mind-blowing accident, which took place in Nikolayev port, Ukraine:
General cargo ship LOUIS was taken to dry dock in Nikolayev , Ukraine, on Oct 18, to offload project or heavy cargo, by dock’s gantry crane. 300-meter dry dock was separated in two by a wall. Deck hands were busy in holds and on deck, unleashing cargo. Suddenly, the wall gave up and collapsed, water in dock rushed like a waterfall, from 15 meter height, into second section, which remained dry. The ship literally, bow-dived with waterfall. Thankfully, dock’s gate wasn’t closed, and river water, which rushed inside into free space, heaved LOUIS and mitigated impact. LOUIS struck the wall by bow, bow ballast tanks reportedly damaged, no information on other possible damages. It was a miracle that no crew were killed or injured by shifted cargo, thanks to a very useful habit of delaying unleashing procedures until last moment.
As of 1700 UTC Oct 19, the ship was still in dry dock.
Report was sent by a person working on one of Company’s ships.
General cargo ship LOUIS, IMO 9501679, dwt 8000, built 2013, flag Antigua, manager Briese Schiffahrts GmbH & Co KG. 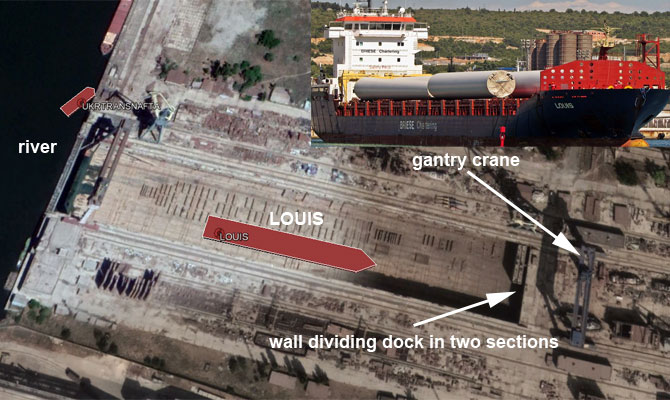