Video of allegedly, struck Aframax tanker AL MARZOQAH, was published by Sky News. No visible, noticeable damages on the looks of tanker. Probably that mark portside in fore area, is a hole? If so, it could be inflicted, beyond reasonable doubt, either by shell or by missile. 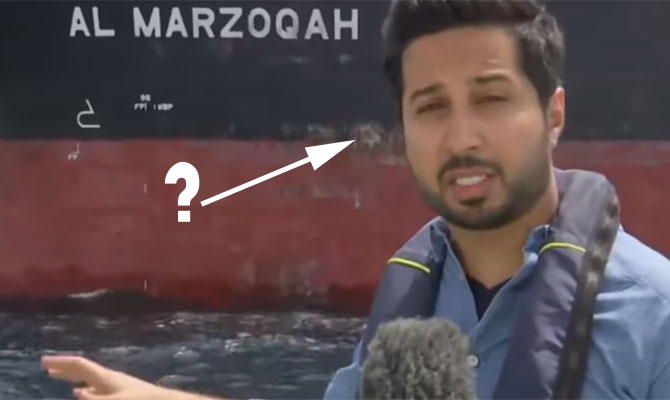 May 12: Contradictory and confusing news on a very major accident in Fujairah, UAE, Gulf of Oman, started to circulate since afternoon May 12, claiming that there were several explosions in Fujairah port area, and that as a result, at least seven tankers were set on fire. UAE officials condemned these rumors as “fake news”, insisting that nothing happened, and that the port is working without any accidents of any kind, let alone series of explosions and fires.
Later though, UAE admits there were accidents, describing them as “acts of sabotage”. In the evening UAE media Emirates News Agency published official press-release:

ABU DHABI, 12th May, 2019 (WAM) — Four commercial ships were subjected to sabotage operations today, 12th May, near UAE territorial waters in the Gulf of Oman, east of Fujairah, the Ministry of Foreign Affairs and International Cooperation, MOFAIC, has announced.
The Ministry said that the concerned authorities have taken all necessary measures, and are investigating the incident in cooperation with local and international bodies.
It said that there had been no injuries or fatalities on board the vessels and that there had been no spillage of harmful chemicals or fuel.
http://wam.ae/en/details/1395302762084

Among allegedly struck tankers are one VLCC, one Aframax and three small tankers, most probably bunkering tankers.
What happened exactly, how bad were explosions and fire, if there were any, and what definition “act of sabotage” means, how much true is indeed, the whole story, is so far anyone’s guess.
At least three of abovementioned tankers, including VLCC and Aframax, are on the AIS, live, no interruptions. There are no auxiliary, or rescue, or fire, boats near them.
Apparently, if there were “acts of sabotage” on or near at least three tankers listed above, first of all VLCC and Aframax, it didn’t happen in port, but on outer anchorage, so news on port being on fire, immersed in dense smoke, can be considered as fake news. 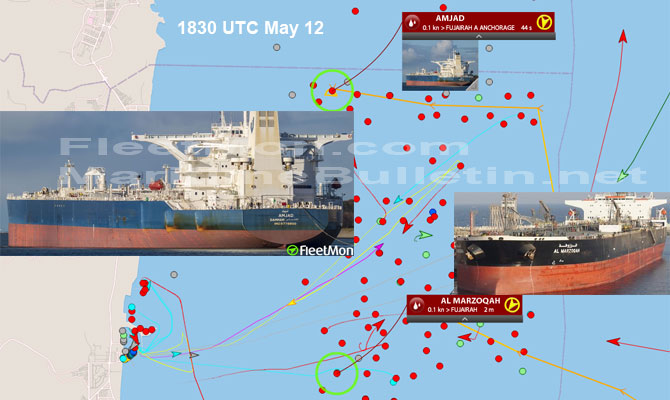