Vietnam law enforcement agencies, assisted by Coast Guard, on Apr 14 seized Korean tanker PIONEER SPIRIT and Vietnamese tanker QNg 0350 in waters of Quang Ngai province in the South Central Coast region of Vietnam, when the ships were engaged in illegal cargo transfer. Vietnamese vessel was to offload from Korean tanker some 8000 tons of gasoline A95 and deliver it to Sa Ky port. Korean tanker AIS was off, since early April. Understood both tankers, seized in international waters, were taken to nearest Vietnamese port for further investigation. No data found on Vietnamese tanker QNg 0350. Vessel looks more like self-propelled oil barge, than a sea-going tanker. Obviously, QNg 0350 size is much less than that required for taking on 8,000 tons of fuel, so assumedly, the vessel was to make several trips, to deliver all contraband shipment.
Product tanker PIONEER SPIRIT, IMO 9166950, dwt 8735, built 1997, flag Korea, manager KSIM Ltd., Busan. 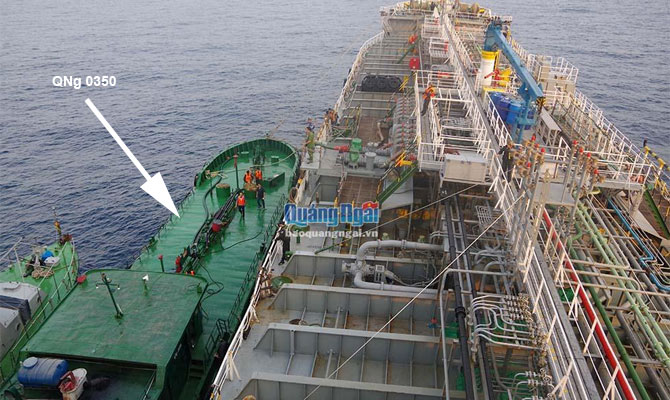