UPDATE 1200 UTC Mar 24: By 0730 UTC 397 people have been evacuated by helicopters, and evacuation operation was suspended, because there’s no need in it any more. The ship is under way, after removing obstacle which hampered her, most probably anchor or both anchors. That explains why the ship was limping in western direction for so many hours, keeping wind and waves on her bow – crew and rescuers were fixing the problem. VIKING SKY is heading for Molde, ETA 1530 UTC, escorted by 3 tugs. Weather according to weather map, is fresh but not stormy. Happy end is near.
I believe VIKING SKY crew and Norwegian rescuers did fantastic job, and averted a major disaster, which could claim many lives. It’s up to experts and specialists now, to investigate the cause or causes of engines failure.

UPDATE 0730 UTC Mar 24: By 0600 UTC 371 people were evacuated by helicopters. The ship is still moving at a very low speed in western direction, either under own power, or under tow. It seems like MB initial surmise was correct one – VIKING SKY was and most probably, still is, hampered by anchor or anchors, being yet unable to heave them up. The weather is visibly calming down, thankfully.

0400 UTC Mar 24: By 0215 UTC Mar 24 262 people out of 1373 on board (915 are passengers) were evacuated, 3 out of 4 ship’s engines are running, VIKING SKY is to shelter at Molde and as of 0400 UTC was moving at some 2.5 knots speed, or towed, with 3 tugs at her side. If the ship is to shelter at Molde, then they’re giving Molde a wide berth, probably because they choose safer approach route, reckoning with size of the ship, hampered maneuverability and strong wind. Weather is calming down. 15 people were injured while airlifted. According to latest officials statements, decision to airlift people was caused by fears the ship could probably ran aground or on rocks, with no or little chance of evacuation by lifeboats in severe storm conditions.

2030 UTC Mar 23: VIKING SKY is slowly moving in western direction, as if something is holding her – with one of two main engines working, she couldn’t move like that, she should proceed, against stormy wind and heavy seas, at a reduced speed of some 6-10 knots, not limp in erratic way. Several reports mentioned anchor or anchors, maybe the ship is hampered by anchor/anchors which can’t be heaved up, for whatever reason?
Also, it is not clear why did authorities decide to evacuated passengers by helicopters, in such a severe storm, putting people in a very serious danger. As of 1900 UTC, some 115 people were airlifted, at least 3 with serious injures. What is it so dangerous in ship’s condition, to leave rescuers with no other choice except evacuation by air? Rescuers fear ship pushed aground or on rocks? Maybe.

1700 UTC Mar 23 Update: The ship is moving away from the coast, not clear how – on tow or escorted by tugs and SAR ships, or probably, drifting with dragged anchor, see map. Her movements are very erratic. By 1430 UTC 100 people were airlifted by helicopters. One of engines is working. All in all, it’s not yet clear what exactly is going on, and how dangerous is the situations for people on board. Officials said they plan to evacuate all passengers and non-essential crew. According to latest updates, there are some 1,300 people to be evacuated.

Initial news:
Cruise ship VIKING SKY suffered engine failure at 1420 LT Mar 23 off Farstad, Norway, in vicinity 63 00N 007 03E, in heavy storm conditions. The ship dropped an anchor and issued distress signal, requesting immediate assistance. Evacuation of passengers and crew under way, they say some 1500 people are to be evacuated, by helicopters and if possible, by SAR boats.

Mar 24:
What caused VIKING SKY trouble and near-disaster? Was helicopters rescue justified?
Maritime Bulletin reader from Netherlands, Mr. Jan Verloop, shared with MB his version of VIKING SKY troubled engines, explaining how and why engines stalled. I believe his version to be very plausible:
Reading the current reports about the Viking Sky distress, I am reminded about the 2012 incident off Alaska when the drilling rig Kulluk ran ashore after its tug Aiviq suffering “engine problems”. The Aiviq engines were OK but suffered from bad fuel, causing all 4 engines to stall. https://www.ntsb.gov/investigations/AccidentReports/Reports/MAB1510.pdf
In both cases the vessels where fairly new and have a diesel-electric drive system. In both cases it was bad weather with a heavy rolling ship. My feeling is that fuel oil got mixed with available water, air and tank residue causing a foam type slurry that upsets fuel filters and centrifuges. Let’s wait and see what the investigations will show
Was decision to evacuate passengers by helicopters a right one?
The ship dropped anchor or both anchors while disabled and drifting towards shore. Situation was very critical and absolutely unpredictable. If the crew failed to restart engines and stop drift, the ship could be pushed onto rocks, with hull breaches, water ingress and very high probability of sinking. Severe storm and high sea wouldn’t allow the use of lifeboats for evacuation. So rescuers were in very dire straits indeed, whether to launch highly dangerous airlift by helicopters, or wait and pray for lucky escape. I strongly believe, that the decision to launch evacuation by helicopters was justified, right, and responsible.
With all that said, I can’t but admire Norwegian Rescue helicopters teams professional skills, and outstanding bravery. 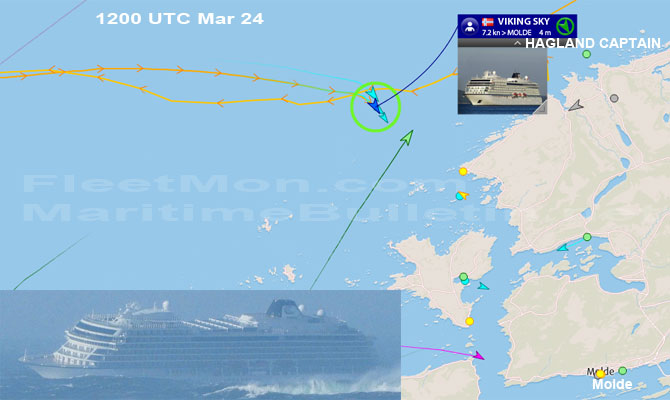 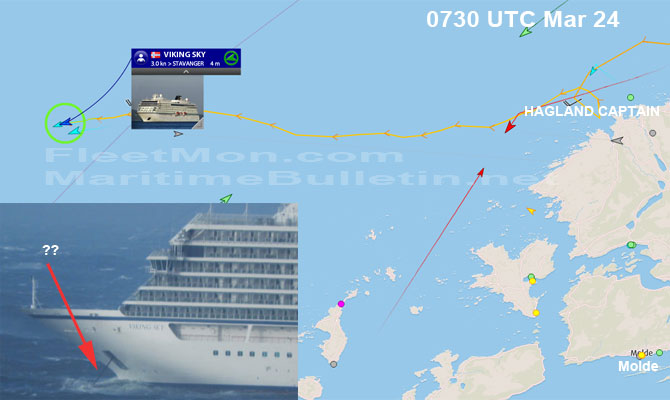 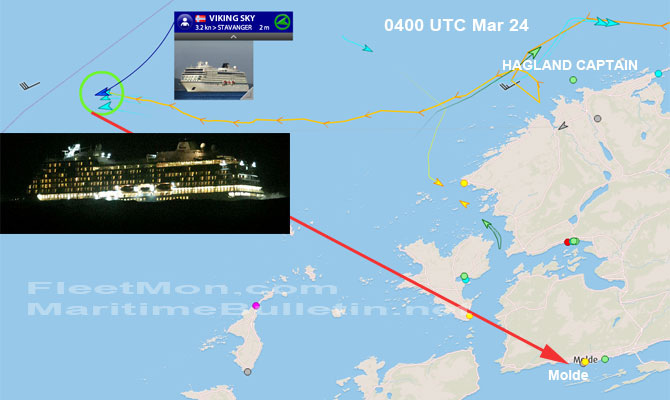 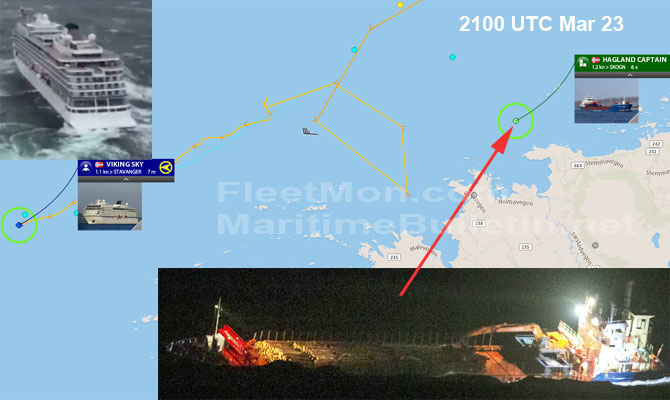 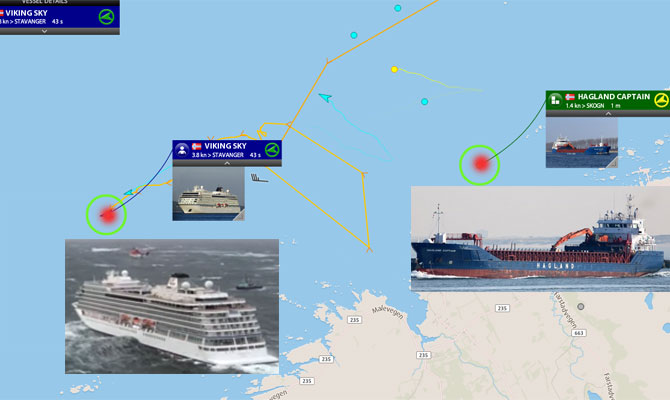 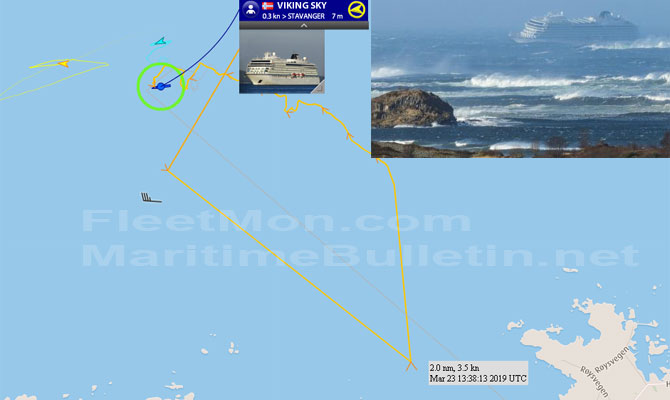 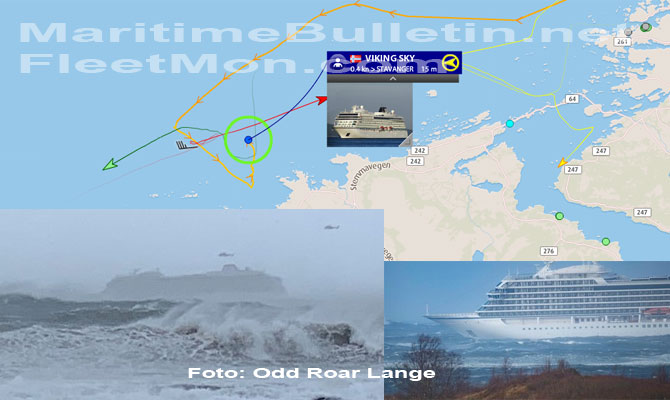