Mar 15: ZEABORN Ship Management Report on E R KOBE fire:
On board the post-Panamax container vessel “E.R. Kobe” (5,700 TEU, built 2001) on its way from Haiphong (Vietnam) to Qingdao (China), a fire occurred on 13 February 2019 in three containers on deck loaded with charcoal.
The crew reacted quickly and prudent and brought the fire under control. The vessel was diverted to Hong Kong, where all containers concerned were safely unloaded under close supervision of a salvage company, local authorities and fire experts.
The vessel continued its journey towards China, when another three containers got on fire while approaching the port of Shanghai. Again, the fire could be extinguished due to the professional and effective actions taken by the crew.
At no time during the events there was any immediate risk for our valued seafarers or the vessel. No one was injured, crew are safe and there was no environmental pollution or any damage to the vessel at any time.
E.R. KOBE is safe at Luhuashan anchorage where all remaining 43 containers loaded with charcoal have been safely discharged. The vessel will shift from Yuanyuansha anchorage to Waigaqiao terminal later today.
The detailed investigation of the cargo damage and the claims handling is ongoing. All actions are taken in close coordination with charterer, agents, P&I and Port Authorities.
E.R. Kobe will continue her way with an adjusted schedule.

Mar 15: The ship was taken to Shanghai on Mar 9, probably moored at Changxing, but on Mar 13 taken to Shanghai inner anchorage. As of 0500 UTC Mar 15, she was on inner anchorage, but not at anchor, surrounded by SAR/firefighting ships and boats.
As it became known, the ship suffered fire in containers on upper deck, reportedly on Feb 14. E R KOBE was re-directed to Hong Kong, fire thought to be extinguished, but restarted on Feb 24.

Initial news Mar 5: Post-panamax container ship in trouble in Chinese waters
Container ship E R KOBE was rumored to suffer fire on board on Mar 1 or earlier while being in Chinese waters, no other information was available. The ship was on scheduled voyage from HK to Shanghai, she arrived on one of Shandhai outer anchorages as early as Feb 23, and is located at Luhuashan anchorage area since that date, moving around or anchored. Interestingly, as of Mar 5, she’s surrounded by SAR ships, tug or tugs and service boat or boats. It may be assumed, therefore, that the ship is in some kine of trouble, probably major trouble.
Container ship E R KOBE, IMO 9222974, dwt 68196, capacity 5762 TEU, built 2001, flag Liberia, manager E.R. Schiffahrt GmbH & Cie. KG, Service ICS: China-Singapore-Malaysia-India-Sri Lanka. 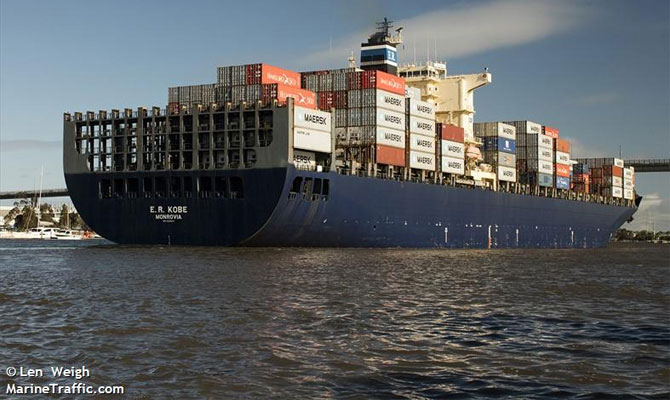