UPDATE 1: Department of Shipping RosMorRechFlot (Ministry of Transport, Russia), said that there was an explosion followed by fire on board of gas tanker during STS operation, fire spread to another tanker. One’s LPG tanker MAESTRO (IMO 8810700, dwt 4811, built 1990, flag Tanzania, manager ?), another one is CANDIY or KANDIY or KANDII – not found in all available databases, also LPG tanker, also Tanzania-flagged. MAESTRO last available AIS is dated Jan 11, Turkey. Most probably, AIS is off, because trading LPG of Crimean origin is illegal according to international sanctions imposed on Crimea and Russia. But what about CANDII/KANDIY… whatever? What about video with fire on cargo deck of general cargo ship?

UPDATE 2: Another tanker found – it’s LPG tanker CANDY, IMO 9005479, dwt 4444, built 1992, flag Tanzania, manager ?). Last AIS dated night Jan 20, tanker was crossing Kerch Strait in southern direction, en route from Temryuk Russia to Lebanon. AIS off during last 20 hours.
So what ship or ships are on fire? LPG tankers or cargo ship? If LPG tankers are on fire, then, both were involved in illegal trade. Both by the way, are owned by offshore companies, in apparent attempt to hide true identity of the owner or owners.

UPDATE 3: Seems like tankers are in major fire, Maritime Rescue Agency said 2 crew died in explosion and fire. Both ships were anchored some 15 nm off Crimean coast, engaged in STS. 17 crew were on CANDY (9 Turkish and 8 Indian nationalities), 14 crew were on MAESTRO (7 Turkish and 7 Indian nationalities). With regards to Video with seemingly, dry cargo ship fire – dry cargo ship was on forefront, blocking the view.

UPDATE 5 1930 UTC Jan 21: 12 crew were rescued, 11 died and their bodies recovered, 3 went under water right in front of rescuers (most probably because of hypothermia and shock), 5 still missing.
Tragedy roots are more or less clear:
Tankers were deployed in sanctioned Crimea shipping, performing STS in Crimean waters. Tankers were operated in “grey zone”, managed by “grey” offshore company or companies. Crews in all probability, were substandard. Tankers are old, and according to risk assessments, both in poor condition. Hence the tragedy, the result of combination of a number of negative factors.

UPDATE 6 Jan 22: Both tankers had been involved in illegal gas supplies to Syria since 2016, according to the Office of Foreign Assets Control of the U.S. Treasury (OFAC). According to ships tracks and port calls records, both were working as gas-train, where CANDY was cargo collector in Russian Ports (Temryuk), and MAESTRO was cargo shuttle, transporting LPG to Syria with fixed AIS tracks. Of course Russian Authorities knew about the scheme, but were covering it up. Tankers transferred LPG in STS operation on anchorage in Kerch Strait waters outside territorial waters, so legally speaking, outside boundaries of Russian jurisdiction. So it was a “gray” business involving a number of possible negative consequences, read above.

UPDATE 7 Jan 23:
Reportedly the ships were performing STS cargo operation while drifting, they weren’t anchored.
Reuters said: “The Maestro was subsequently barred from using Temryuk port in southern Russia by the owners of its only gas terminal, Maktren-Nafta, two industry sources said, where it had previously loaded liquefied petroleum gas of Russian and Kazakh origin for export to the Middle East”.
Reuters kind of, strayed off fairway here – both ships are/were under sanctions, and it wasn’t the question of Temryuk Port accepting or barring sanctioned tankers, it was a technical question of changing papers in order to hide – at least on papers – sellers and origin of the cargo. It was cargo laundering. Advise Reuters do some digging near Europort, or North Cyprus, or in other places, and find out how sanctioned cargoes from/to sanctioned States surface as clean and legitimate.

INITIAL NEWS:
Numerous sources and media report “disastrous major fire” on board of “gas tanker” at Kerch Strait south entrance, Black sea. Some say just tanker is on fire, some say two tankers were performing STS operation and now both on fire, crew jumping overboard. All sources though, say that the ship on fire is Tanzania-flagged. Video was already posted on youtube. Well, according to video, it’s a general cargo ship of river-sea type, major cargo ship type in this region. Only one such ship under Tanzanian flag found in the area – DAISY, IMO 8033120, dwt 3353, built 1981, flag Tanzania, manager MD SHIPPING ODESSA – UKRAINE.
In one more report, one rather well-known Russian journalist said, that the ship was attacked by Russian Air Forces and caught fire after being shelled or bombed.
What a mess! 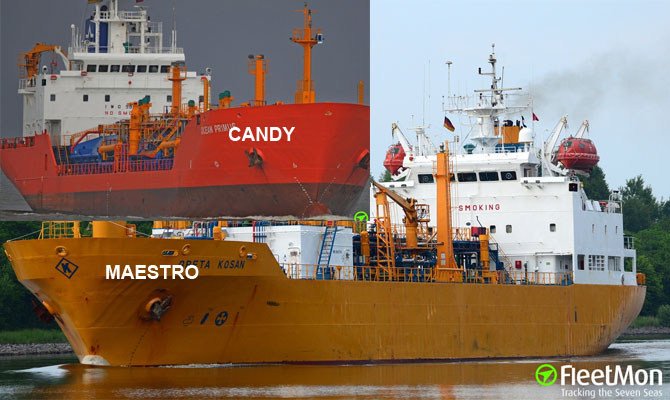