Nov 17 Update: Bulk carrier returning to Canada, to St. Jonh’s, obviously for survey, repairs. Resuming voyage was found to be too risky, most probably.

Capesize bulk carrier CENTENNIAL HARMONY reported power problems at around 1700 UTC Nov 15, some 270 nm SES from St. John’s, Newfoundland, while en route from Sept-Îles, eastern Quebec, Canada, to Port Talbot UK. According to media, there was water ingress, too, but no details were given, so probably it’s a misunderstanding or exaggeration. Media also mentioned looming evacuation, saying that the “were heading to lifeboats after the ship took on water”, but Canadian Coast Guard denied evacuation and said situation was under control.
CENTENNIAL HARMONY was NUC for several hours, and according to AIS, resumed sailing at around 0100 UTC Nov 6, albeit at somewhat reduced speed. There are no CG or SAR or other ships near CENTENNIAL HARMONY, meaning there’s no need in assistance or standby.
Bulk carrier CENTENNIAL HARMONY, IMO 9590838, dwt 181338, built 2011, flag Panama, manager MK CENTENNIAL MARITIME BV, Netherlands. 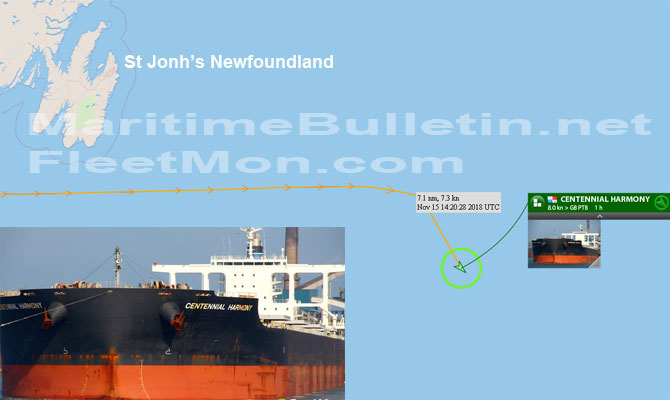