Nov 2 Update: Tanker was released and as of 0530 UTC Nov 2, was sailing in northwest direction south of Lome Togo, destination unknown, with armed security on board. Crew understood to be safe and weel. Most probably, tanker was released after pirates siphoned from tanker its’ cargo of fuel. No news yet on 4 crew kidnapped from offshore supply ship ARK TZE (IMO 9418767, dwt 2319).

Oct 31 Update: Relatives gave their consent to public all known details. Crew consists of a dozen seamen, including Latvian, Filipino, Russian and Ukrainian nationalities. As of 1530 UTC Oct 31, no news yet, no AIS, understood no communication.

Oct 30: Two cargo ships were attacked by pirates west of Pointe Noire Congo, West Africa, at around 1300 UTC Oct 29. One managed to escape, another one was hijacked. It’s tanker ANUKET AMBER, according to information I received from crew relatives, who’re understandably, very worried. They’ve been told by crewing company, that connection with ship was lost, manager and other involved parties are taking all necessary measures. They weren’t told if the ship was hijacked or troubled by other accident. No news, no AIS signal since then, so presumably, tanker was hijacked with the purpose of stealing its’ cargo. If pirates were in for crew and ransom, they’d already leave tanker with kidnapped crew, and tanker should already re-emerge. 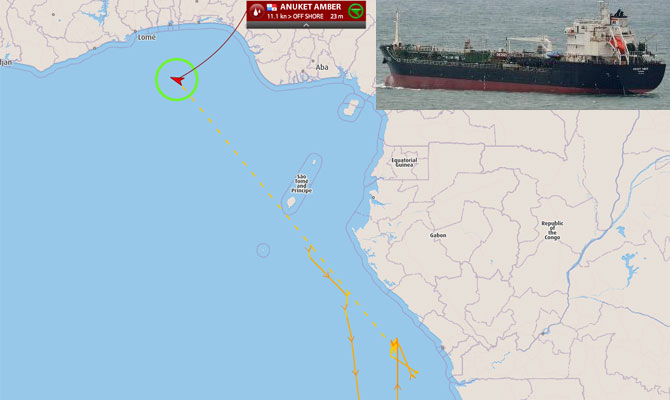