Prosecutor General of Ukraine on Nov 1 issued statement, saying that Ukraine detained cargo ship COMAT in port of Mariupol, Ukraine, Azov sea, and confiscated 3,000 tons of steel plates, destined for Belgium. Steel plates were produced by Alachevsk Steel Mill, the Mill being under control of criminals since 2014, when Russia-backed criminals and so-called “separatists” occupied Donetsk and Lugansk regions of Ukraine. Any deals with any companies and factories on occupied territories are, according to Ukrainina and International laws, considered to be illegal. All involved parties, including manager of the ship, can be (and according to Ukrainian Prosecutor General will be) prosecuted, facing imprisonment up to 8 years, not for illegal trade and violation of sanctions only, but also, for collusion in terrorism.
COMET called Mariupol on Oct 28, arriving from port of Temryuk, Russia, Azov sea, where illegal shipment was loaded. COMET was to load other goods in Mariupol.
General cargo ship COMET, IMO 9146106, dwt 10095, built 1997, flag Liberia, manager BLUMENTHAL, JOHANN M.K., GMBH & CO. KG REEDEREI. 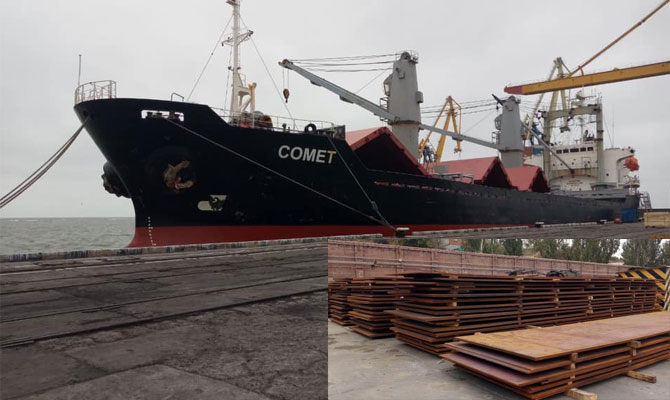