Captain of Greek tanker PANTELENA spoke to Georgia First Channel TV and said, that tanker was hijacked on Aug 13. Tanker was held by pirates for 9 days, all crew were locked in one of the cabins, giving enough food and water by pirates. They left the ship after 9 days, crew safe, nobody was injured. Captain didn’t say how tanker was released and on what terms. Captain gave interview via phone from Lome, Togo, where tanker arrived on Aug 24. Crew includes 17 Georgian and 2 Russian citizen.
Most probably tanker cargo was stolen, there were some 7000 tons of fuel on board at the time of hijack. Ransom version is highly unlikely. Pirates of Gulf of Guinea kidnap crews for ransom and keep them on land, but they didn’t ever hijack the ships and hold them in a way Somalia pirates did, because they don’t have safe dens to keep hijacked ships for weeks and months, required for getting a ransom.
Previous news: http://maritimebulletin.net/2018/08/24/allegedly-hijacked-greek-tanker-found-safe-in-port-well-allegedly/
Product tanker PANTELENA, IMO 9321469, dwt 10726, built 2006, flag Panama, manager LOTUS SHIPPING CO. LTD, Greece. 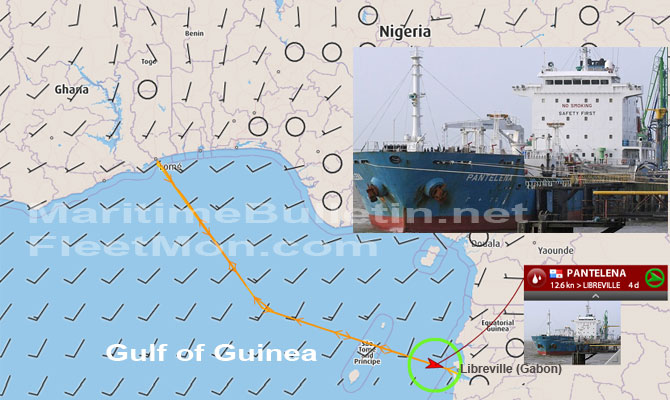