Offshore supply tug ASSO VENTOTTO was working with platform Sabratah of Mellita Oli & Gas in Mediterranean near Libyan waters, when in the afternoon Jul 30 she was ordered to pick up migrants from the inflatable boat which was floating some 1.5 nm off the platform, 57 nautical miles from Tripoli, 105 miles from Lampedusa, 156 miles from Malta and 213 miles from Pozzallo in Sicily. Libyan Coast Guard officials reportedly, boarded platform and supervised operation. The tug picked up 101 migrants and as ordered by authorities, sailed to Tripoli Libya, escorted by Libyan patrol boat. Migrants were safely disembarked in Tripoli, ASSO VENTOTTO sailed back to platform.

All the organizations which are actively engaged in migrants invasion, from UN to NGOs, already said ASSO VENTOTTO broke the laws, though they can’t say exactly what laws were violated. They’re at a loss, you see. The ship did exactly what it was supposed to do – rescued people, and took them to nearest port. Supporters of migration apparently, are afraid, that this precedent may become a guideline for other merchant ships in the area. If the ship is ordered to pick up migrants, next move should be contacting Libyan authorities, and transferring migrants to Libyan port in accordance with Libyan CG instructions.

Merchant ship with hundreds of migrants on board is by definition and by fact, the ship in distress, its’ main and only priority is to provide safety for crew, ship itself, and migrants, not to ask the UN what are the migrant laws as of today, and how did they change during last 24 hours. Safety is the first and main consideration, the rest of considerations are irrelevant, and not just that, those other considerations, mainly being UN and NGO ideas on what’s best for them and for invasion, are life-threatening.
Put it another way, UN and NGOs, by their insane and unlawful demands, are jeopardizing the ships, the crews, and migrants, too. 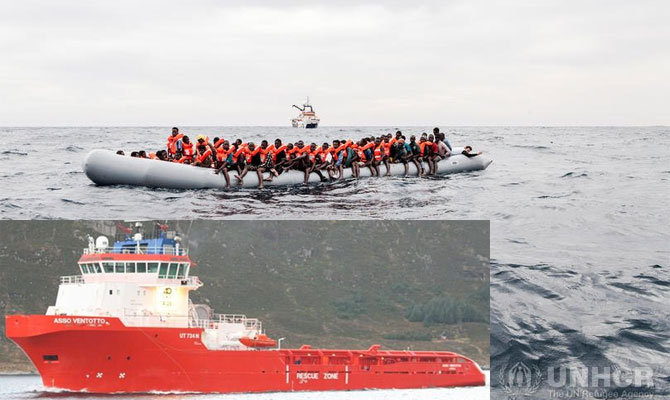