Offshore supply ship VOS THEIA was reported by Reuters as attacked at 1430 UTC Jun 3 by armed people from a boat some 33 nm off Hodeidah, Yemen, while waiting at anchorage for permission to leave from a Saudi-led military coalition. Unidentified forces attacked a U.N. aid vessel and started a fire in the engine room, port authorities said on Jun 4. Hodeidah is held by the Iranian-aligned armed Houthi movement which has taken large parts of the country in a three-year-old war.
VOS THEIA is the U.N. World Food Programme (WFP) chartered ship, and delivered to Hodeidah a shipment of some unnamed goods, Yemen’s Red Sea Ports Corporation said.
“Attackers opened fire and attempted to take vessel over. Both the crew and the vessel are safe, with no injuries or obvious damage to the vessel,” WFP spokeswoman Bettina Luescher said in a statement sent to Reuters.
According to available AIS track, VOS THEIA continued sailing after attack in northern direction, but stopped at around 2130 UTC Jun 3. The ship didn’t suffer obvious damages, said WFP, but somehow, attackers managed to start fire in engine room. How?
Offshore supply ship VOS THEIA, IMO 9585742, GT 1678, built 2011, flag Gibraltar, manager OFFSHORE SUPPORT VESSELS II BV, Italy. 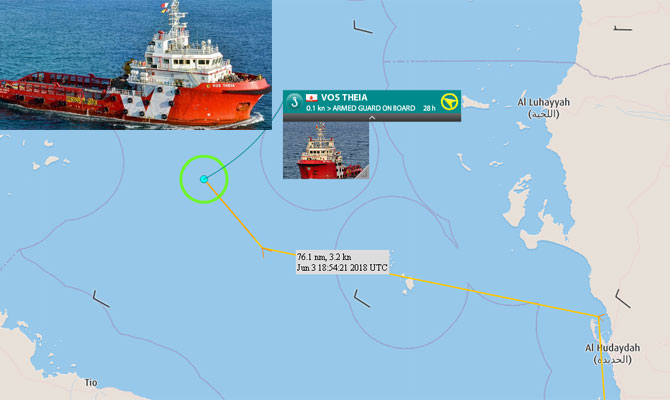