Update: According to local officials, bulk carrier already completed loading and was leaving or about to leave. Tugs prevented fire from spreading to holds and cargo of more than 70,000 tons of coal. Officials separate spilled burning diesel fuel and bulk carrier fire, but they’re obviously, connected.

News on Balikpanan (eastern Kalimanta, Indonesia, Makassar Strait)) oil spill and fire emerged in the morning Mar 31 – they were sketchy and confusing, no ship fire was mentioned. It was said, that there was fuel spill in bay area, originating from Chevron Terminal, understood it wasn’t tanker spill. Later fire was reported in the bay, which killed two fishermen. Latest news said that anchored bulk carrier EVER JUDGER was caught in blazing fuel on water surface, probably it just drifted towards the ship. All crew, all of Chinese nationality, were evacuated, local tugs are trying to cool ship’s hull with water, to prevent fire on board. two people confirmed dead under unclear circumstances, one of them Chinese. One crew suffered serious burns.
Judging from photo, EVER JUDGER was damaged by fire at her side. The ship said to be loading coal, partially loaded.
Bulk carrier EVER JUDGER, IMO 9632844, dwt 82000, built 2014, flag Panama, manager FLEET MANAGEMENT LTD-HKG. 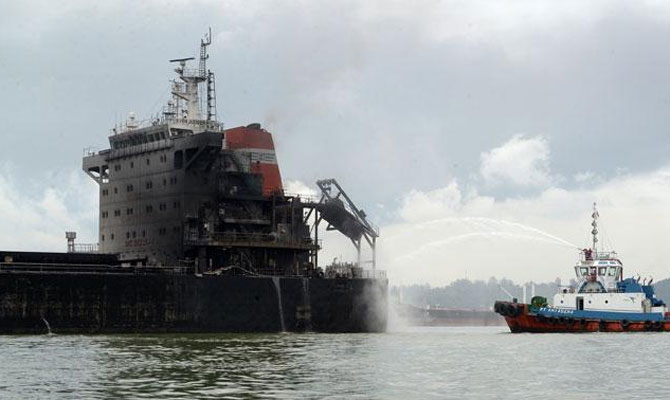 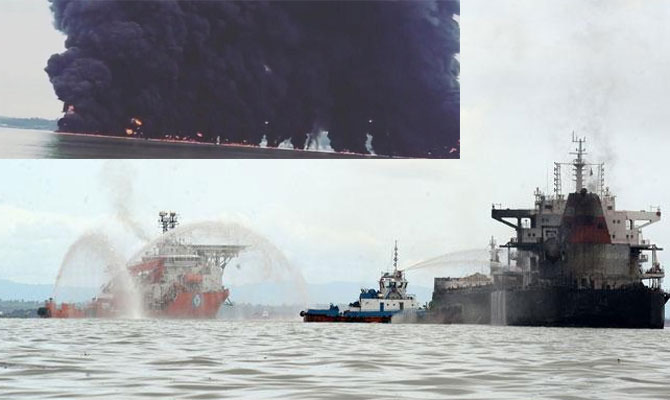