Mar 31 Update: Bulk carrier according to Moscow MRCC report refloated in the morning Mar 31 by own means, and was brought to anchor near grounding site for survey. Underwater survey carried out earlier didn’t find hull damages and breaches, the ship grounded on sandy bottom. HARRIETT resumed voyage at around 0600 Moscow time.
Mar 22: Bulk carrier HARRIETT (IMO 9239458) is still aground in White sea near Mudyug island coast. Officials said on Mar 21, that the ship will be refloated by icebreakers without lightering.
During the night Mar 14 bulk carrier HARRIET ran aground off Mudyug island western coast, White Sea, Russia, shortly after leaving Arkhangelsk port with 20000 tons of coal on board, destined for Terneuzen Netherlands. Bulk carrier was proceeding in ice, with icebreaker in the lead. Icebreaker suffered blackout, bulk carrier moved with ice floe from fairway to shallows. As of Mar 19, bulk carrier is still hard aground.
Underwater survey to be carried out on Mar 20, two salvage options under consideration: either to lighter bulk carrier, or attempt to refloat her with the help of icebreakers.
Alert:
Mar 16: Bulk carrier HARRIETT, IMO 9239458, dwt 25,565, White sea off Arkhangelsk port, Russia, marked as aground since afternoon Mar 15, shortly after leaving Arkhangelsk, bound for Terneuzen.
Mar 17 Update: As of 0800 UTC, still marked as Aground, coordinates don’t change.
Mar 19: As of 0800 UTC, still in the same position.
Bulk carrier HARRIETT, IMO 9239458, dwt 25,565, built 2002, flag Liberia, manager AMUR HARRIET LLC, Hamburg. 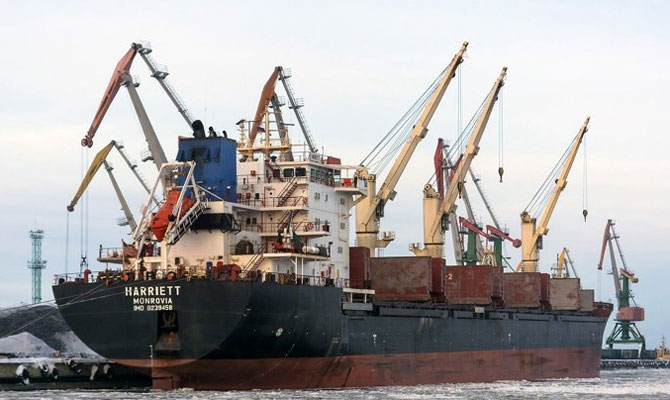