300 kilo of cocaine were seized on board of Danaos’ container ship DIMITRIS C at Genova, Italy. Plastic bags with cocaine were found by ship’s all-Ukrainian crew and reported to Italian authorities. Danaos issued a statement, with details of this incident.
The ship, crew and operator are in no way related to this contraband attempt, on the contrary – Italian officials commend crew’s help in finding and seizing of the drugs. Prior to Europe, the ship was calling a number of South and Central American ports.

Danaos Statement:
On Thursday February 15, in the morning hours, a quantity of suspicious substances in plastic bags was discovered by the crew on board the Container Carrier DIMITRIS C, managed by Danaos Shipping Ltd.
The vessel is of 3.430 TEU capacity and registered under the Maltese flag. She was lying in GENOA roads, in international waters, waiting for instructions by the Italian authorities.
The suspicious substance, hidden in a remote place on deck, was discovered after a thorough search, which is carried out by the crew upon arrival and after departing from ports with increased probabilities of substances trafficking, as per the company’s standard policy.
The discovery was immediately reported by the Master to the company and the Authorities, again in accordance with said company policy.
It must be noted that as regards container carrier vessels, the content of the containers is not communicated neither to the vessel nor to her managing company (except for “dangerous goods” such as flammables, chemicals, explosives, as well as the content of reefer containers). Furthermore, loading – discharging operations are not carried out by a vessel’s crew, but by stevedores who are not the responsibility of the vessel.
The vessel is currently berthed in the port of Genoa under the control of the Italian Authorities. 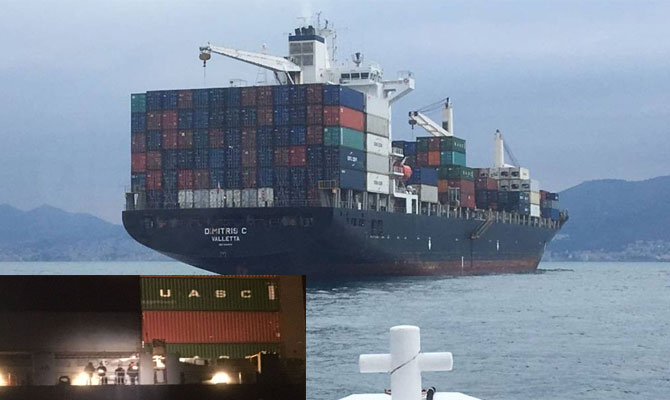