There’s no doubt, that Russian fishing vessel VOSTOK capsized and sank, and there’s no hope, that anyone from 21 crew survived disaster. There’s no doubt as to the main cause of the disaster – severe northwestern storm with wind up to 30 meters/sec in gusts, high waves and extremely low temperature down to -20-25C. Vessel capsizing could be explained by ice covering, or by mechanical failure, which could be repaired probably, in very short time under normal circumstances. But in the seas VOSTOK was caught in, minutes of being turned broadside to waves and wind could be enough to lead to disaster. It’s like a bat battering plastic toy, minutes at the most. Either vessel returns to the course keeping her against waves and wind, or sinks.

It isn’t the first disaster of such kind. Freighters and fishing vessels do sink regularly in this area, in winter time. Can it be avoided? Yes, it can, the northbound and southbound voyages can be safe from those murderous northwestern storms. All small or middle-sized ships like fv VOSTOK, or middle-sized cargo ships, especially not enough seaworthy river-sea type ships, could and should proceed along the mainland coast – i.e. along the coast of North Korea. They’ll sail through smooth waters, there’s no space enough for waves to grow up. Or they can just anchor and wait through storm.

But that’s impossible. North Korea rejects shelter, even if it’s the question of life and death. North Korea will arrest (and arrests) ships straying into her waters when in distress, bring them to its’ ports, and keep for days at best, months at worst, squeezing out of owner as much money as possible (the ship and her crew meanwhile, being ripped off anything worth taken, from first of all, food, to valuables and ship’s supplies, including paint, oils, etc.). North Korea doesn’t restrict the area it can seize ships, by North Korean inner waters only, it may (and does it regularly) seize foreign ship in international waters.
Russia does nothing to stop it. Kremlin doesn’t care if its’ own people fall victims to North Korean outrageous policies (no secret here – Kremlin being happy with North Korea as a tool to be used against USA and Japan). Dozens already perished, dozen will die, until North Korean regime falls down.
Voytenko Mikhail
January 27, 2018 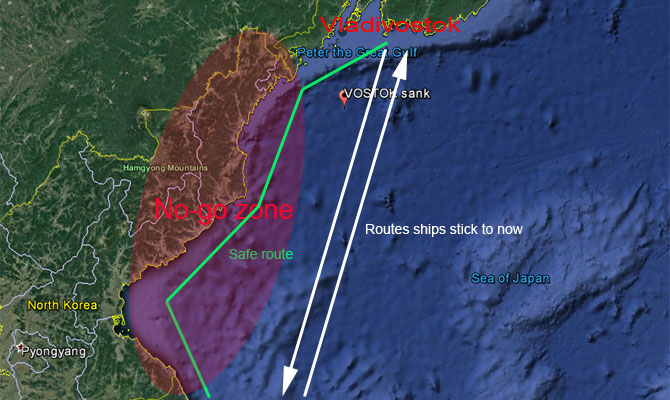