Russian Navy came up with a new version of its’ spy ship LIMAN disaster, accusing Lebanese livestock carrier YOUZARSIF H as a sole and main culprit in an accident, and demanding the seizure of  YOUZARSIF H. An article in Nezavisimaya Gazeta (http://www.ng.ru/armies/2017-05-03/100_youzarsif.html), published on May 3, refers to expertise, given by Russian General Staff adviser, admiral Kasatonov, and retired commander of Russian destroyer Petropavlovsk, Kapitan First Rank (Naval Captain) Kuzmin. According to them, LIMAN was at anchor at the time of collision, which fact of course, makes YOUZARSIF H the main culprit.
But there are some “buts” in this new version. Up until May 3, no Russian media said, that LIMAN was anchored, though this fact, be it fact, is a key one in ruling out, who’s to blame. There’s still no official statement, which clarifies ship’s status at the time of collision. On the contrary, all previous stories and officials statements implied, that both ships were under way, and though according to Russia, both ships were to blame, YOUZARSIF H guilt was so to say, bigger, because YOUZARSIF H had to give way to LIMAN, but with that, no detailed description of the accident was given, either by media, or by Navy. No map pics with ships’ tracks, no coordinates – nothing, just short description. Russia turned to conspiracy versions instead, and several editions published stories, which hinted at possible sabotage, plotted by either Turkey, or NATO, or both.
Turkey didn’t, and still doesn’t, release detailed story, too, though at the very least, Turkish CG should know, whether LIMAN was at anchor, or under way. YOUZARSIF H owner in his turn (said to be Romanian Tatar of Crimean origin), said, that the LIMAN was, kind of, fooling around in an area with heavy traffic and a lot of anchored vessels, i.e. harassing navigation. YOUZARSIF H suffered slight damages, and shortly after collision sailed back to Constanta. She’s said to undergo repairs, but after Russian Navy open threat to arrest her – in international waters, if there’s no other way, with deployment of Special Forces – she’s about as good as laid-up, at least for the time being. It all turned into some kind of a bad joke, when all of sudden, substandard livestock carrier YOUZARSIF H became a personal enemy of the whole Russian Navy.
There’s something fishy in new Russian version, besides the lack of detailed description of an accident. Kapitan First Rank Kuzmin said, that YOUZARSIF H fled the scene of a collision, which is, to put it bluntly, a lie. YOUZARSIF H didn’t flee, on the contrary, the vessel rescued part LIMAN’s crew, or all the crew, later transferred to Turkish CG and Navy ships. Why did he say that? Why lie? In all such accidents, it said a lot about the vessel, which sunk in collision another vessel, didn’t ran off and rescued the crew of that sunk vessel.
Up until now, everything Russia said on LIMAN disaster is contradictory and confusing. It looks like Russian authorities, including Navy Brass, didn’t decide yet, what version suits them most, and is less humiliating. LIMAN’s status as anchored, therefore, is just another try. One fact is stupefying, though – in more than a week’s time after disaster, Russia still can’t say, whether the ship was anchored, or under way.
On a photo said to be runaway YOUZARSIF H, busy with rescuing LIMAN crew.
Voytenko Mikhail
May 5, 2017 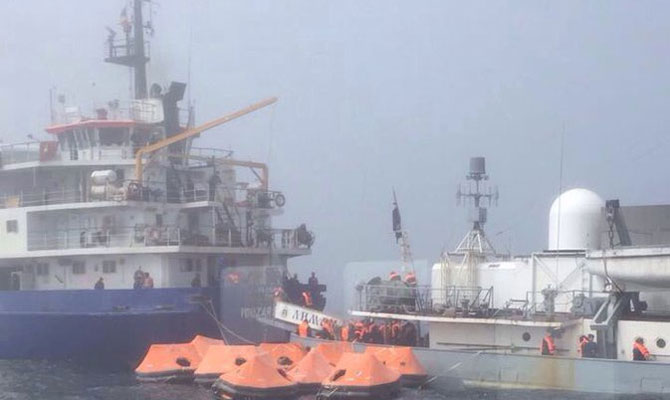 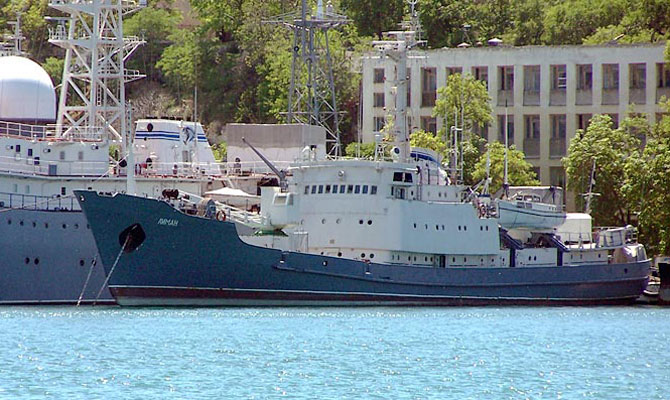