Bunker tanker XELO issued distress signal on Apr 15, reporting water ingress, flooded engine room, at Gabes Anchorage, Tunisia, Gulf of Gabes. All 7 crew (Azerbaijani, Armenian, Turkish nationalities) were reportedly evacuated. Ship loaded with 750 tons of fuel was en route from Sfax Tunisia to probably, Egypt, according to track, but not to Malta. She left Sfax anchorage on Apr 9 heading south, appeared east of Gabes on Apr 14, with missing AIS records between Apr 9-14, but 5 days are hardly enough for s slow-speed old tanker to run from Sfax to Damietta Egypt (1000+ nm), carry out cargo operations and sail back to Tunisia waters (why to Tunisian waters, by the way, if she was bound for Malta?).
Tanker might be still afloat, maybe capsized, AIS is off during last 25 hours as of 1030 UTC Apr 16.
Tanker was Russia-flagged and owned until Jul 2021.
Bunker tanker XELO ex-LIMAN, IMO 7618272, dwt 1010, built 1977, flag Equatorial Guinea since Jul 2021, Russia-flagged until Jul 2021, manager STAR ENERGY Istanbul (EQUASIS). 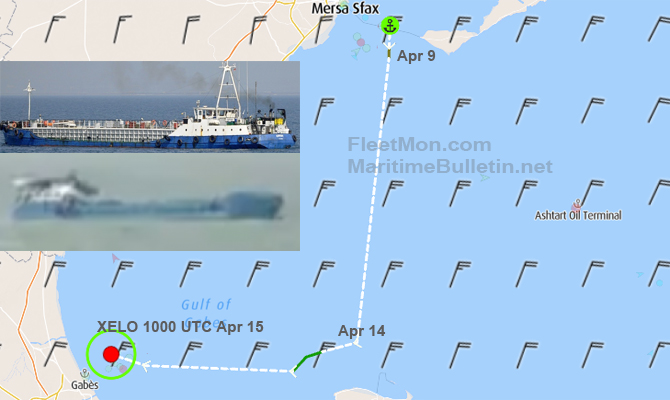