Ukrainian Ombudsman Lyudmila Denisova said in her Telegram channel on Apr 11, that Russian military seized all the 19 crew of bulk carrier SMARTA, plus Captain’s wife, and took them to an unknown location. She added, that the ship was fired upon, prior to crew capture. 18 crew are Ukrainians, 1 is Egyptian.
SMARTA is docked at Mariupol since Feb 21, she was to leave for Turkey after completing cargo operations.
Recently Bulgarian and some Turkish Media started to publish materials, which are claiming that Ukraine has blockaded its’ ports with naval mines, accusing Ukraine of holding foreign ships and crews as hostages. Russian officials including military, accuse Ukraine of laying mine fields in Ukrainian waters, thus effectively locking cargo ships in its’ ports. Russia – they say – is trying to provide safe passage for foreign ships stuck in Ukrainian ports, but can’t do it because of mines.

Here’s an obvious, logical question to be asked – Russian Black sea Navy Fleet might is overwhelming, exceeding all the Navies of Black sea States combined, with probably, only Turkish Navy being the exception. For all intentions and purposes, Ukrainian Navy is as good as non-existent.
Russian Black sea Navy Fleet includes at least 12 minesweepers and a dozen or more of anti saboteur boats. So the question is, why Russian Navy can’t make safe passages in mine fields, or disarm them altogether, using its’ fleet of modern minesweepers?

Ukrainian port are locked by tight Russian Navy blockade, but still, Russian Navy can’t provide safe passages.
Some Bulgarian media happily publish statements and materials, originated from one “Donetsk People’s Republic”, and re-post Russian MSM videos and photos of a mine visible on the surface, in Mariupol harbor. One more question – since when do Navies lay up mines on the surface, not under water? Another question – why Russian minesweepers didn’t yet disarm this mine?

No doubt, both sides are interested in having foreign ships locked in Ukrainian ports – kept as, to put it frankly, hostages. But it doesn’t justify this wretched practice. Most important issue is, therefore, is the issue of real power and control. Who’s physically capable of keeping the ships in port, what side and in what ports? Ukraine might keep ships in ports by simply not allowing them to leave. With that, Russian Navy is having an upper hand, with her ships blockading Ukrainian waters, and beyond. Ukraine may allow the ship to leave the port, but Russia will stop her by not guaranteeing safe and free passage through a blockade, strangling the shipping with a tight noose of Navy ships over Ukrainian waters. 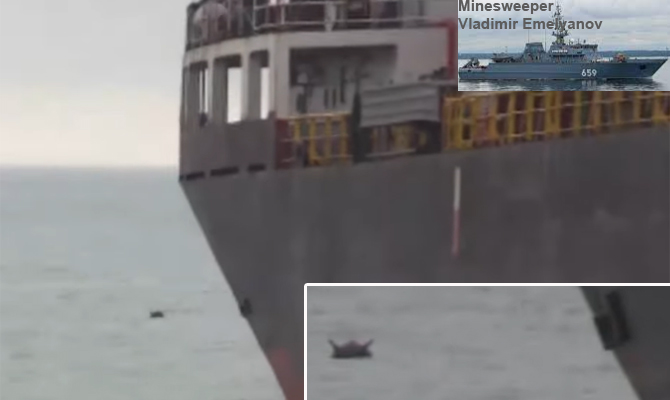