Container ship SM BUSAN arrived at Victoria Anchorage, B.C., Canada, on tow of two Seaspan tugs and offshore tug MAERSK LAUNCHER (IMO 9425746), at around 0300 UTC Jan 2. As of 0330 UTC, SM BUSAN was still maneuvering, most probably in process of anchoring.
SM BUSAN left Vancouver, Wash. USA, Columbia river, on Dec 19, bound for Busan Korea with ETA Dec 29. She entered Pacific and was sailing full speed until late Dec 20, when she went NUC the first time. The ship managed to resume sailing some 40 hours later, but at reduced speed. On Dec 24 she went NUC again, resumed moving on Dec 27, but it was decided, apparently, to re-direct her to Prince Rupert, Canada. SM BUSAN was suffering from fuel issue, as it transpired later, or it was said so by CCG. On Dec 29 the ship changed course and headed for Juan de Fuca Strait, changing arrival port from Prince Rupert to Victoria, ETA Jan 3. On Dec 31 she was either taken on tow or joined to escort her, by MAERSK LAUNCHER (IMO 9425746).
Container ship SM BUSAN, IMO 9312767, dwt 80855, capacity 6655 TEU, built 2007, flag Korea, manager SM LINE, Busan. 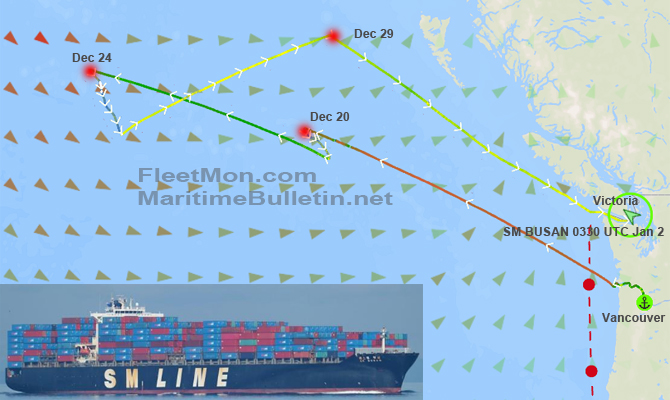