Dec 11 1610 UTC UPDATE: The ship was successfully towed and berthed in Gothenburg in the morning Dec 11, firefighting continues in much more safe and favorable conditions. Fire doesn’t spread any further. To heave up ship’s anchor, outside power source had to be applied, from one of salvage ships. Understood ALMIRANTE STORNI managed to move to port from anchorage under own power. 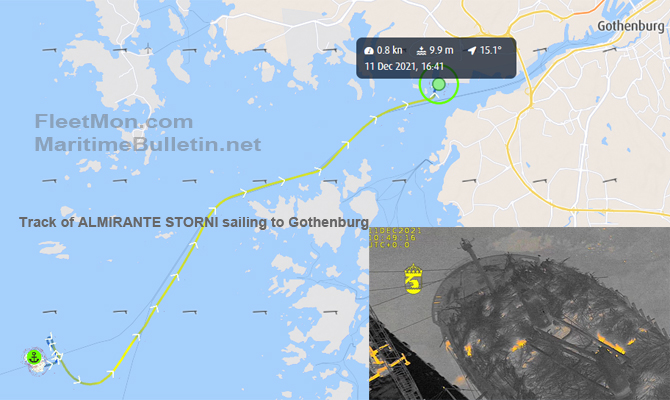 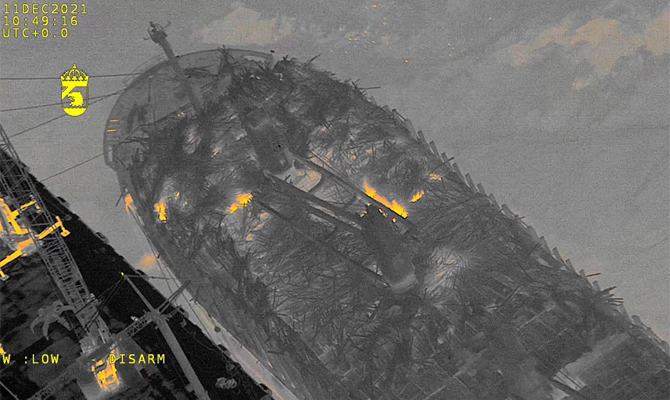 Dec 11 0530 UTC UPDATE: No changes in firefighting process, but at least fire doesn’t spread further, that’s good news. It was decided on Dec 10, to take the ship to port, as the best option to extinguish fire and with that, keep the ship safe. Towage was to commence at 0500 UTC Dec 11, and according to AIS tracks, operation was already under way as of 0530 UTC Dec 11. Hopefully, towage will be smooth and safe. 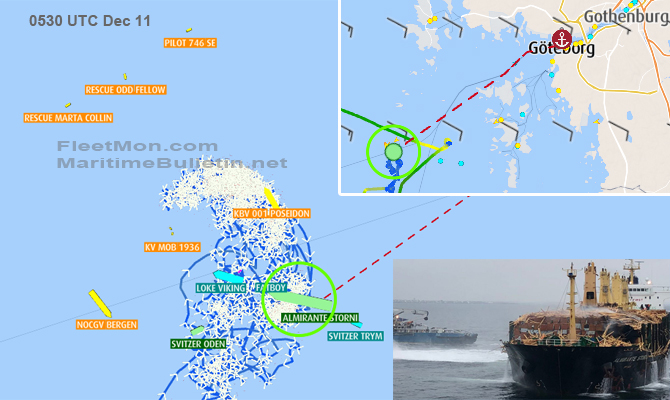 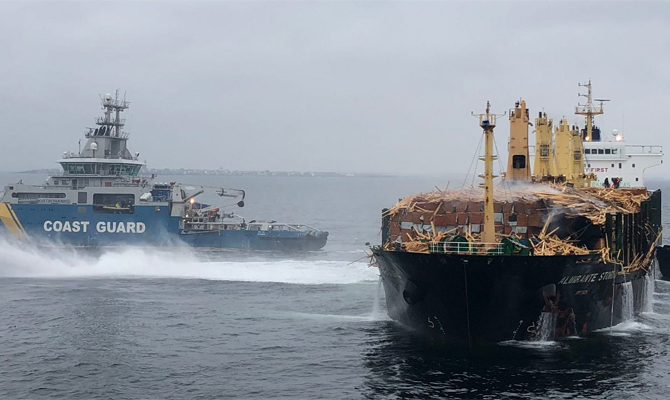 Dec 9 1440 UTC UPDATE: The ship has to be relocated either to port, or to sheltered waters, asap, said Swedish CG. Her present position makes firefighting very difficult because of rough weather/sea conditions, worsened by icing, all the more so because of approaching storm. The good news is, fire doesn’t spread further from the main body of fire.

Dec 8 1530 UTC: Firefighting continues, and latest thermal images showed disturbing developments – fire probably, is spreading again. All involved parties are now considering other options of further actions – either to take the ship to some shelter, where firefighting won’t be hampered by weather changes, or to take her to port. Sweden meanwhile, asked neighbouring countries to provide additional resources, and Norway has already responded. There’s another weather factor which has become a problem – low temperatures, combined with rough seas, cause icing, which results in negative effects on firefighting equipment. 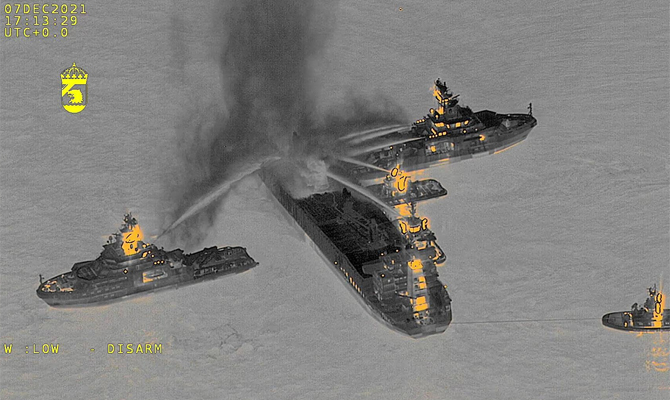 Dec 8 0630 UTC UPDATE: No decisive changes – firefighting still on, by means of pouring water onto fire and burning wood. It contains fire and prevents it from spreading, but it doesn’t extinguish main body of fire. The weather after being fine for some time, is worsening again.

Dec 7 0700 UTC UPDATE: Firefighting under way, it went on throughout last 24 hours, but fire though contained, is still raging on in fore cargo hold or holds. Ship’s structural strength remains intact. All crew are on board, taking part in firefighting. Looks like fire will be extinguished not before main bulk of cargo of wood will burn out, so as it seems, the biggest problem is ship’s structural strength – will it be strong enough to hold on and not give up here and there, in forms of deformations, cracks, etc.? Ship’s hull condition is monitored by drones and helicopters with heat sensors.
Photos: @kustbevakning Swedisch Coastguard 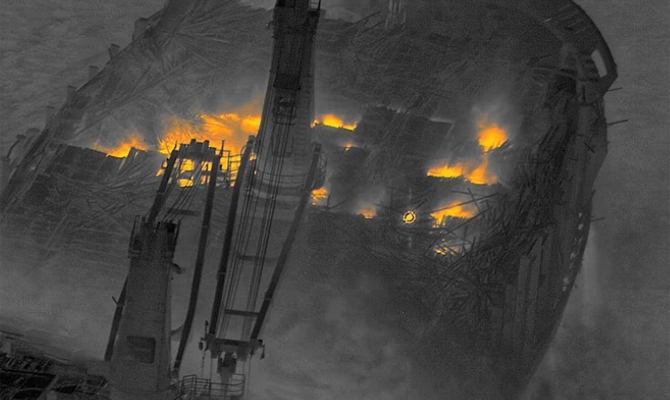 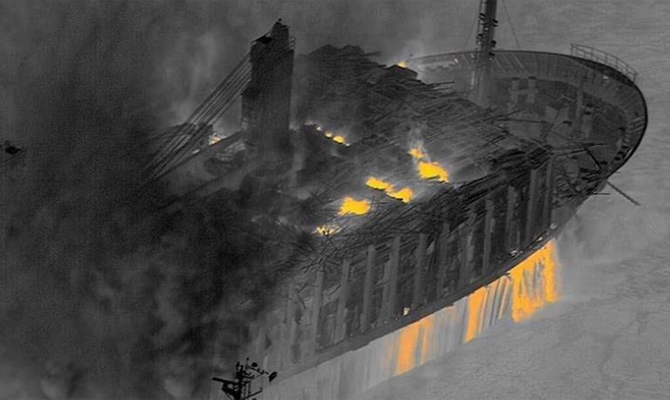 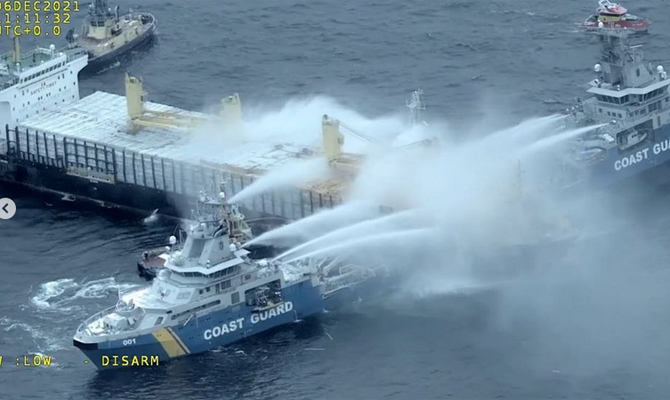 Dec 5 0240 UTC UPDATE: Firefighters together with crew have been fighting fire throughout the night, and it’s not yet under control, though understood, restricted. Firefighting is hampered by a strong wind blowing up fire, to such an extent, that the deployed tugs tried to keep the ship in most favorable for fighting position. Fire is raging in fore cargo hold, or holds. 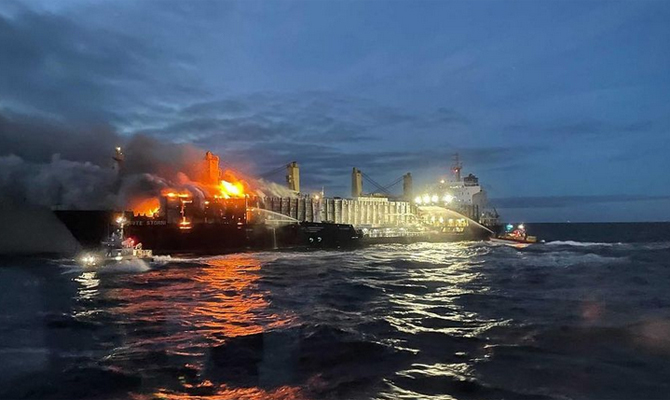 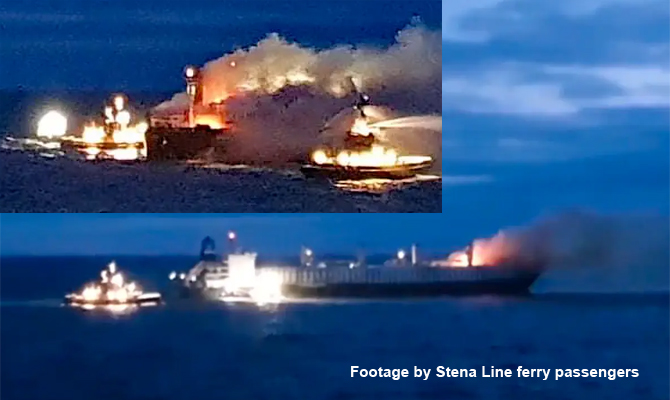