Bulk carrier ZILOS, disabled by explosion on Aug 31, as of Sep 7 is still adrift, understood she’s to be towed to Montevideo by offshore tug RG WARRIOR (MMSI 701120000). Captain of bulk carrier reported to MRCC Uruguay, according to local sources, that the crew will be able to restart engine and the ship will reach Montevideo under own power, but it seems unlikely.

Initial news:
Bulk carrier on fire after explosion, adrift in South Atlantic, 1 crew died
Uruguay MRCC at night Sep 1 received an emergency call from US CG, reporting bulk carrier ZILOS in trouble some 760 nm E of Montevideo. The ship suffered an explosion, one crew was killed by this explosion, but no other details were given. Probably, explosion occurred in engine room, and disabled the ship – ZILOS is not under command, drifting, since evening Aug 31. Later she was reported to be “on fire”.
She’s en route from UAE to Montevideo, scheduled ETA Sep 10.
Bulk carrier ZILOS, IMO 9199206, dwt 46541, built 2000, flag Panama, manager KARLOG SHIPPING CO LTD (EQUASIS). 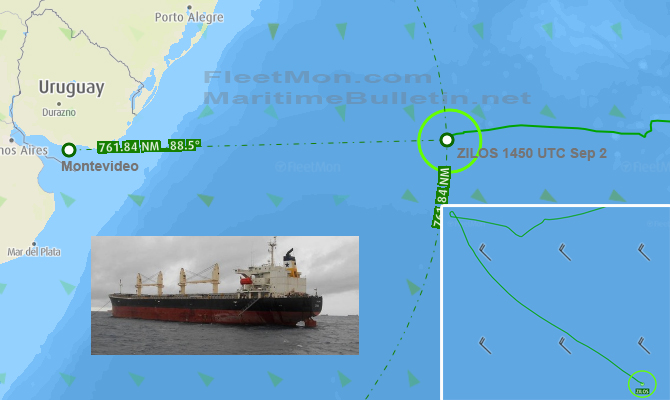