ECSA and ETF came up with a joint initiative which proposes some protocols or guidelines, in order to achieve more or less smooth process of crews change and more broadly, their treatment at ports of call worldwide. ECSA/ETF Statement was released ahead of meeting of Special Tripartite Committee of the Maritime Labor Convention.
Some of their proposals or proposed protocols, addressing Member States (MS) of infamous MLC, seem pretty reasonable.
– MS are to ensure, that seamen can:
travel to and from their country of domicile and their place of work without restriction;
move freely between regions and states of applicable countries.
– MS should exempt seamen from quarantine upon arrival in the jurisdiction in which they will sign on to their vessel.
– MS, in planning for vaccination programmes in their own jurisdictions, should ensure that seamen can access vaccinations as a priority.
https://www.etf-europe.org/wp-content/uploads/2021/04/ETF-ECSA-Key-Workers_final.pdf

ECSA/ETF of course, didn’t dare to deviate from mandatory course plotted by Party (globalists), and didn’t demand, specifically and unequivocally, the ban of mass crew vaccinations. No party is in right to demand or order crew vaccination, be it MS “health authorities” or shipowner or charterer, in any given port of call worldwide, or in ports of MS, claiming to become “vaccination hub”. Any such demand/order should be considered as unlawful or downright criminal.
Such mass vaccinations are extremely dangerous for health and lives of the crews, as it is probably, demonstrated by recent mysterious cases of mass crew illnesses and deaths (4 deaths allegedly caused by covid since the launch of mass vaccination, with no death cases recorded during year 2020 and early 2020). There’s an alarming recent accident with Suezmax tanker FAIRWAY, which had to be moved from anchorage to port by several tugs, because the ship was immobilized by mass and sudden crew sickness. What will happen to ships and crews, when ships are immobilized by sudden mass sickness while deep in the ocean? There’s no other plausible explanation to these recent accidents, except connecting them to mass vaccinations.

From recent news: “Shipping groups have criticised governments for blocking crew changes despite claiming to uphold seafarers’ rights under the Maritime Labor Convention”. https://lloydslist.maritimeintelligence.informa.com/LL1136574/Shipping-condemns-travel-bans-for-undermining-seafarers-rights
Now, what else did you “shipping groups” expect? Either you’re feigning, once again, your “deep concern”, or you’re real, genuine idiots. Here’s a very short explanation for you and all concerned – this whole “pandemic” issue, putting aside its’ ultimate goals, is in its’ essence, a hoax, an anti-scientific fake. All who’re taking part in this unprecedented crime against humanity, are driven exclusively by their egotistic ambitions, to profit from it or to save their careers. The same reasoning pertains to all concerned governments, first of all nations’ health agencies. They don’t give a damn about their own Nations’ claims to uphold seamen rights, and they’re having an upper hand, even over their own governments. They have their own agendas and goals, most of these goals being temporary, tactical ones, in military terms. That is to say, that everything “pandemic” is based on lies and corrupt persons and organizations, it’s a classic organized crime scheme, though on a scale unimaginable for any of your mafia mobs or drug cartels, they’re children in comparison. Everybody for himself in this crime scene, pursuing his own personal, egotistic goals. There’s no uniting universal idea, and there are no morals behind it, because “pandemic” is in its’ core, deeply evil and immoral. So of course, “pandemic” created and continue to create, every passing hour and day, a chaos, an uncontrolled, corrupt and criminal, social environment, which kills everything it sucks in, including foreign crews.

Quite frankly, there’s no sense in my analysis of proposed protocols or measures, in an attempt to offer most safe for seamen protocol. All the protocols or plans, proposed by any of international maritime organization are the shortest way to deadly chaos, being either uselessly bureaucratic or plain stupid, like the crew change protocols concocted by usual clowns, IMO/ICS/ITF, last year. Why? Because “pandemic” unfolding disaster is already incontrollable, just like it should be. It’s a Frankenstein going loose, and now its’ own creators can’t control it, even if they want or try to. That’s the standard way evil works, nothing new.
There’s no realistic way to ensure safety and green venue for anyone (except super elites), including seamen and ironically, the majority of “shipping leaders”. We’re already occupied by this hostile power called “globalists”, impersonated by UN/WEF, and occupational regime is cementing with each passing day. The only realistic way out of “crew change crisis” is the destruction of occupational regime, or total civilizational collapse.

That’s why I address Russian-speaking seamen time and again, in my video and written messages – leave the seas now! Stay on land, with your families, for a year or two, it won’t be late to return to seas if some kind of order emerges, enabling some minimal level of your, seamen, personal safety, and more or less smooth crew change routes. Refuse or evade while at home, vaccination, both of yourself and your family. International maritime organizations, starting from IMO/ICS/ITF, are of no help or use or even hope. That’s only logical, that’s their way – they aren’t masters of themselves (if they ever were), they’re puppets, carrying out hostile, deadly agenda. 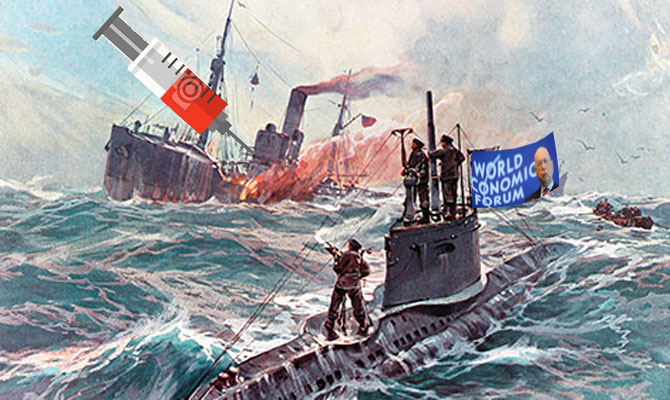