As of 1630 UTC Mar 28, the ship remains in the same position, though according reports, there was some movement, confirmed by AIS, which showed a 0.1 knot speed. Salvage operation latest:
Smit Salvage has already been considering whether some of the Ever Given’s 18,300 containers will need to be removed by crane in order to refloat it, with the President of Eygpt giving permission for this course of action.
Suez Canal Authority (SCA) sources told Reuters that a mass of rock had been found at the bow of the ship, complicating salvage efforts.

Number of speculations and conspiracies with regards to grounding cause, meanwhile, grow up in geometric progression. Regretfully, even Resistance media got hooked, and unknowingly, support MSM in general hysterics, flooding audience with grim economy forecasts. Even in the worst-case scenario, Canal blockade can’t lead to logistics and supply chains disruptions, unless the disruptions are artificially facilitated. Globalists are busily doing exactly that, for decades already, aren’t they? Without any accidents in the main waterways bottlenecks. Suez blockade is a very convenient pretext and excuse, plus a very effective decoy to distract people from their miseries and fears, caused by “pandemic/vaccination” attack on humanity.
There’s no doubt, already, that the main cause, the root cause of EVER GIVEN accident, was an enormous size of the ship. Other contributing factors are secondary, even if these factors were the ones which triggered grounding. There are two of them, actually – one is a short-time blackout, which made ship uncontrollable (the event of blackout or any other breakdown repeatedly denied by ship’s management); second is a very strong, gusty wind, which hit giant ship so hard, that she couldn’t react fast enough, and ended up in Canal’s bank, at 12-knot speed. An officer of one of the ships in this convoy confirmed such a possibility, saying that, at one time, his ship barely missed contact with the bank. His ship was lucky enough to be ahead of EVER GIVEN in the convoy, thus avoiding the trap.
Here’s the main argument, the main consideration – will grounding be that serious, if the ship is of lesser size, having lesser momentum and when aground, giving more space for tugs to pull her off? EVER GIVEN is in full load, and with so many containers stacked on her upper deck, with her flat sides so high above water, she’s effectively, one big floating sail, experiencing tremendous wind pressure. Undoubtedly, this factor also contributes to grounding, to an unknown extent, maybe it was the main factor which triggered grounding, even without a breakdown.

OK, now it’s time to ask both major liner shipping companies (finger-numbered, with all lesser players wiped out from market) and SCA – what the hell they’re thinking about? Did they calculate, evaluate such risks, and probabilities of such accidents? Taking these giants through Suez Canal slit is obviously, blatantly, a very risky undertaking, if the ship sails as it is, without any precautions or extra safety measures, like for example, tugs, to escort each and every mega container ship. There’s no actual need in expanding Canal, at least for now, but Canal must safeguard itself from these floating disasters, mega container ships. Either by prohibiting their transit, or by implementing extra safety measures, however expensive.

SCA has something else to think about, besides Canal technical characteristics and ships sizes. Below is the Statement given by Master, whose ship recently transited Canal. Suez Canal is nicknamed “Marlboro Canal” among seamen, for many years already, because of incessant practice of extorting cigarettes mostly, and to lesser extent, alcohol, by Canal’s pilots and other staff dealing with transiting ships and crews. It’s a secret only to maritime bodies and their servants, industry media.
Read this Statement and ask yourself – can such incident lead to accident like grounding or collision?
…
Please note the below incident which occurred during vessel’s Suez Canal Transit (Southbound) on xxx 2021.
Vessel picked up the first Pilot at 0424hrs before Canal entry and entered the Suez Canal (Port Said side) at 0530hrs.
Before disembarking, the pilot requested for Ciggarettes which was politely declined by master stating the zero corruption policy implemented on board as per charterers. The pilot disembarked thereafter.
First Pilot change (at Canal Entry) was from 0526hrs to 0534hrs.
The 2nd pilot (xxx) who boarded the vessel was on board till Ismalia.
The pilot was seeming a bit anxious during manoeuvring and on a few occasions tried to call out the helmsman for steering courses 0.2 degrees more than required. Master was present at all times and at no point did the helmsman execute a wrong helm order nor was any issue with vessel’s steering noted.
Before disembarking the pilot requested for Ciggarettes which was politely declined by master stating the zero corruption policy implemented on board as per charterers.
Second Pilot change at Ismalia from 1005hrs to 1013hrs.
The 3rd pilot (xxx xxx ID No xxx) after boarding the vessel exchanged a few words with the pilot who was disembarking (in their local language) as is the general practice in Suez.
He refused to exchange pleasentaries with the Master and immediately after the 2nd pilot disembarked he said –
Quote- “Captain, please take the ship and navigate through the canal. I am only here to assist and advise you as per Suez Canal rules.” -Unquote
When questioned regarding what he meant by the same and if he will be giving helm orders and courses to steer, he said that master was fully responsible for the same and navigating through the canal. The pilots job was only to observe and advise as required.
Please note that while this exchange was happening, the vessel was still underway in the convoy, passing bends and turns in the canal for which the helm orders were being given by Master.
In the next 15-20 mins whilst manoeuvring through the canal, the pilot was politely, sternly and diplomatically requested to co-operate however he kept saying that the Master is supposed to handle the vessel. Additionally he said that the last pilot has handed over to him regarding issue with vessel’s steering, hence he will only observe.
He was assured by Master that their was no issue with the vessel’s steering, something he could have observed in the 20 mins he had been on board; however he refused to co-operate.
At that moment my focus as master was the safety of the vessel and the safe navigation (without any assistance from the pilot), along with ensuring the Bridge Team does not get distracted and therefore could not indulge in any detailed argument with the pilot.
After about 20 mins of navigating through the canal (Near Ismalia) in an area where there were continuous alterations and no steady course, with the pilot not giving any helm orders, and trying to harass the Master & vessel, the pilot was told that the matter will be reported to Ismalia Port Control.
As soon as the master picked up the VHF and called Ismalia Port Control on Ch8, the pilot raised his volume high, started shouting, snatched the VHF from the master’s hand (which also resulted in advertently pushing the Master) and threatened that if same was reported “It will not be good for the vessel”.
At that very moment, in his raised volume he called for fwd and aft stations and for both anchors to be lowered to water level, as he insisted on stopping the vessel and arresting vessel for faulty steering. He said vessel will be held at Bitter lake until sea trials were carried out.
Fwd station was immediately manned however anchors were not lowered as ship was doing 9 knots speed.
… 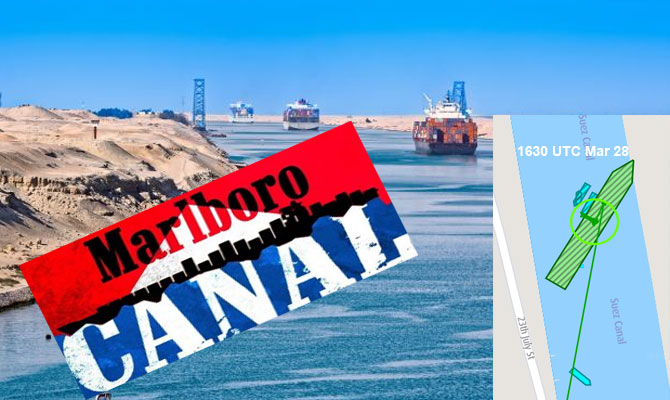