All the media, mainstream plus industry, are trumpeting Maersk latest virtuous ambition:
“COPENHAGEN (Reuters) – Shipping group Maersk said on Wednesday it would accelerate plans to decarbonise sea-borne container shipping by putting the world’s first vessel powered by carbon-neutral fuel into operation in 2023, seven years ahead of its original plan. …”
This news is virtually everywhere, one can’t open any hot news feed without stumbling on this one. Maersk glorious and noble statement coincided with Maersk NeoPanamax latest containers loss in the Pacific: “Containers lost by MAERSK Neopanamax North Pacific UPDATE turned back”.
Just one question to Maersk and other container majors – can’t you design and build safe and cost-effective ships, to operate them in clients-friendly and responsible mode? No, you can’t, obviously. You’re too far into New World Order agenda, and you’re, as of now, greatly benefit from it. “Carbon-neutral, eco-friendly ship” of very near future will probably, be carbon-neutral, but it won’t be – ever – eco-friendly in true, scientific meaning of ecology. It will be just another hoax, very expensive, very harmful and astoundingly useless and unnecessary, if applying to mankind/economy true interests and benefits. When/if NWO wins and reduced world population to desired numbers, it won’t need these “carbon-neutral” bastards and monsters anyway, the whole hoax will quietly evaporate, melt away. It’s a tool to ruin economy and bring mankind to its’ knees, it’s not an “aim”.
Meanwhile, another attempt to explain recent major containers loss surfaced, this time in a Dutch industry outlet, where interviewed Dutch ex-Captain shared his version of the cause of these accidents. It’s even worse version, than the first one, voiced by another outlet – see details here:
http://www.maritimebulletin.net/2021/02/15/container-shipping-major-accidents-and-bottlenecks-and-socialism/
Ex-Captain blames modern Captains of container ships for these major losses, because they yield to Companies pressure to stick to schedule, neglecting weather and safety considerations. Modern Captains according to ex-Captain, are mostly, of Russian, Ukrainian and Polish nationalities, unlike good old times, when they were predominantly, westerners – being by default, brave, unyielding stalwarts of exemplary seamanship. Most disgusting thing is, he didn’t mention other nationalities, because Satan forbid, it may be considered “racist”. I don’t know what kind of Captain he was, probably a good Captain, but as of now, he’s just one more broken personality, succumbing to NWO agenda and betraying his colleagues. And yes, he’s a total moron, because his version just doesn’t stand any deep analysis. It’s one more superficial, abusive trash.
What the hell is happening to mankind, including shipping? Why so many people, if not the majority, transform into sheep with such an ease? Cowardly, brainless sheep – but with that, they’re remarkably greedy and open to any corruption, dumping their integrity, their souls, in return for minute perks? Why a very small bunch of monsters, of sick perverts like Gates of Schwab or the majority of nations “leaders”, practically conquer the world, and get away with it?
Speaking about bad, folks, you ain’t seen nothing yet – real bad is only starting to roll out. If you’re obediently wearing mask whether compelled or not; if you’re queuing to get your vax jab; if your blood isn’t boiling with anger when you see children wearing muzzles; if you prefer to believe into “pandemic” hoax out of fear of reality, you deserve it all – your present problems and miseries, and very close, very bad future. 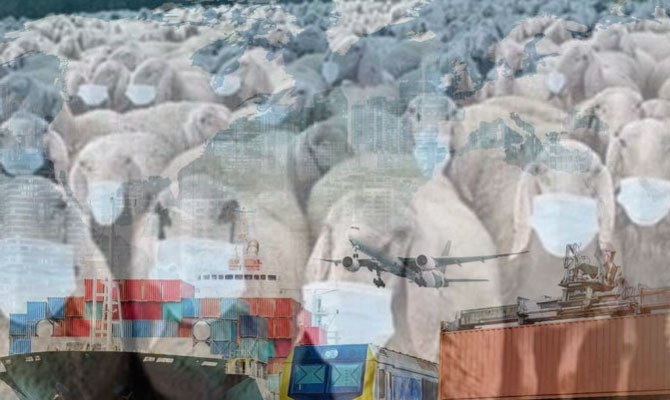